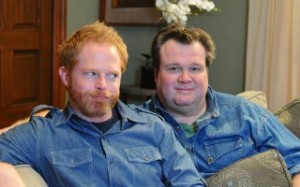 Dr. Jonathan Gotschall, professor of English at Jefferson University in Pennsylvania and the author of The Storytelling Animal: How Stories Make Us More Human, published a piece in Psychology Today on Wednesday in which he cites several psychological studies that find the fictional stories we consume have profoundly affects the way we view people of diverse backgrounds. Specifically, our fictional gay and black “friends” in televisions shows, films and books make us more tolerant of diversity.

Gotschall writes that psychological studies have concluded that an individual with gay or black friends is much less likely to have a prejudicial bias towards African Americans or Homosexuals. Likewise, the viewers of television programs with gay and black characters are more likely to view those characters as their “friends” and will experience a similar reduction in their biases.

“Research shows that regular contact with homosexual friends or family members is a better predictor of gay-friendly attitudes than gender, level of education, age, and even political or religious affiliation. And the same seems to be true for the illusory relationships we form with fiction characters,” writes Gotschall. “Studies indicate that watching television with gay friendly themes lessens viewer prejudice, with stronger effects for more prejudiced viewers.”

The implications of these studies extend beyond the issue of homosexuality and bias. For example, if you are white and you make a black friend, your prejudice is likely to diminish. And the same thing happens if you make faux black friends with the characters on The Cosby Show or Everybody Hates Chris. All of this research adds up to a surprising possibility: fiction characters from Will and Jack, to the big screen characters played by Sidney Poitier and Denzel Washington, to the protagonists of novels like Roots and Uncle Tom’s Cabin, may have improved the lot of American minorities as much as direct political action has.

Stories have had profound effects on history and politics as well, writes Gotschall. From Alexander the Great who was influenced by Homer’s The Iliad to Ron and Rand Paul who were moved deeply by the novels of Ayn Rand.

Gotschall cites programs like Modern Family and The Cosby Show for introducing counter-stereotypes into the national zeitgeist and paving the way for a broader acceptance of minorities.

Put another way, new research doesn’t just suggest that fictitious gays blazed the trail that led to Barrack Obama’s historic endorsement of gay marriage. It suggests that but for “fictitious blacks”—from Kunta Kinte to the powerful African American commander-in-chief on the television show 24—we might not have had a President Obama in the first place.