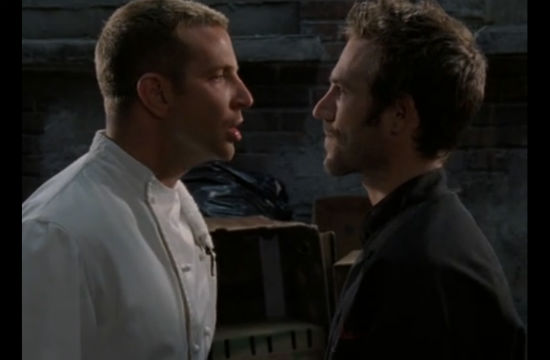 Kitchen Confidential experienced a meteoric rise in quality by episode four and, dare we say, this is perhaps the best installment of the one-season wonder. So lovely we found this episode — in which a winkingly familiar French BFF of Jack Bourdain’s named Michel Valentine steals one of Nolita‘s recipes, triggering a prank war — that we don’t have the heart to pick it apart in traditional recap form. It’s best consumed as intended, by watching the whole, delightful 22 minutes yourself. Accept, instead, our 12 favorite quotes from the episode, which you can watch below.

Jack, to his old chum: So how do you French guys get all the women? I mean granted, you’re all very pretty. But you have this attitude, you know, and you don’t bathe.
Michel: No, no, no. We bathe! We bathe in love, we bathe in wine…no. Joking. We don’t bathe.

Mimi, scolding Jack for comping the French squad’s meals: Jack, they don’t pay, I don’t get tipped. What do you think, I’m made of money?
Jack: Yes. Money and bitterness.

Jack, after Michel inquires as to his and Mimi’s relationship status: To tame that attitude, you need a whip and a wooden chair, you know what I mean?
Michel Valentine, to his assistant: Roger, I need you to go to my office and get me two things.

Jack: Hey, Jim? Why don’t you go sit in the storage room and come out when you’re not a rip-roaring idiot, okay?
Jim: …Diggity dang-it!

Seth, pissed that Mimi banged the enemy: We sent Mimi on a diplomatic mission, and he sent her back sullied and defiled.
Jim: And satisfied…
Jack: Jim? Go to your idiot-hole.

Jack, addressing the prank war: Take the lamb off your menu.
Michel: Return my creepy baker, then we’ll talk.
(later)
Michel: YOUR CUISINE IS CA-CA!

Jim, with a handful of order tickets: Jack, I think there’s something wrong with the computer here. I got orders for 10 toilet burgers, a monkey nipple salad, two fart cakes — I’m sorry — three fart cakes, and a fish penis and moose rectum lasagna with super butt cheese. And pineapple salsa.
Steven: …We’ve been hacked!

Babette: (walks into Jack’s office) My boyfriend is sleeping with your girlfriend.
Jack: Mimi? She’s not my girl–
Babette: This conversation tires me, we should be having intercourse right now. (mounts Jack)

Teddy: Since when have you ever had enough, Jack? You’re an addict. Except this time, instead of booze and drugs, it’s conflict.
Jack: You work on that speech with your therapist?
Teddy: …We polished it together, yes. It was meant for my father, but it ALSO APPLIES TO YOU.

Michel: Somebody stole our freeon compressor. We will be dark tonight. …Also the carpet smells of peepee.