Last Call: Black And White And Proud All Over 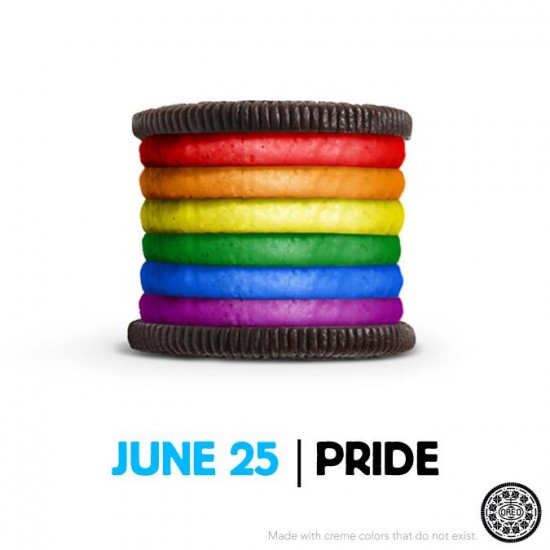 Gawker: Though technically the Gay Pride Parade was last weekend, yesterday Nabisco posted this photo of their iconic Oreo cookie on their Facebook. The photo was shared over 49,000 times and gained over 168,000 “likes,” though it obviously made some people vow to never buy Nabisco products again. If you’re so inclined to boycott Nabisco, here’s a list of things you can never, ever buy again, because you got offended by this humble rainbow cookie.

Miss Austin Texas: Paul Qui has a pretty kickass girlfriend/“backbone of his operation” who goes by the name of Deana Saukam. She travels, eats, wears Rag & Bone, and wishes that Slash was her mom. You are so cool, Deana. So cool.

Vanity Fair: David Chang took some pictures of what he ate on a recent trip to Hong Kong. He suspects that he got served tourist ramen at one point, which is sad, until you realize that the people he interacted with on that trip would do cold-blooded things like leave their slow-eating sister behind at a restaurant.

Conde Nast Traveler: As we continue to celebrate Marcus Samuelsson Just Released A Memoir Day, he gives CNT his predictions on future food trends. In twenty years, for instance, the hot thing will be Afghani and Iraqi food — mainly because it will take twenty years for the region to become stable enough for us to start traveling/eating there. War! Good God. What is it good for?

The Daily Mail: McDonalds plans to celebrate the London Olympics not by paying  tribute to athleticism and grace, but by building the world’s biggest McDonald’s smack dab in the middle of the Olympic Park.  But don’t worry! It’s going to be completely disassembled after the Paralympics; it’s just there to provide 1 out of every 10 meals served at the Olympics!…yeah, it’s sad.