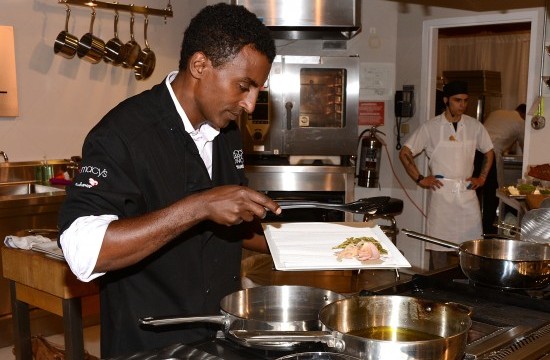 In an op-ed published today in the Huffington Post, Marcus Samuelsson adds his voice to the group of chefs calling for creative, flavor-driven solutions to the growing childhood obesity epidemic in America. While he certainly advocates government policy intervention, Samuelsson thinks that he and his fellow professional chefs need to get rid of the distinction between “healthy” food and “tasty” food. “I don’t distinguish the music I listen to from great music — it’s just music,” he wrote. “There shouldn’t be an announcement that divides our food between what tastes good and what is good for us.”

But we’ve lived so long with this distinction that tasty food is full of lard and foie gras and artery-clogging goodness! And isn’t health food supposed to be gross? Actually, says Samuelsson, that’s really an American phenomenon and it doesn’t have to be that way:

I am always shocked that people in second and third world countries living on very low incomes are often are eating meals that are far healthier (and tastier in my opinion!) than what we eat in America. I’m constantly experimenting with different combinations in my kitchen to replicate this way of eating. Lately, I’ve been experimenting with ramen and created a noodle made from teff, a delicious food grain that is very important in Ethiopia because it’s used to make injera, the flatbread Ethiopians eat with every meal. I could tell you how nutritious it is, but that’s not the point. If you eat a bowl, you will find it equally if not more tasty and fulfilling than that burger and fries. Also, by continuing to surprise your taste buds you won’t need to overeat — you’ll just be looking forward to the next innovation on your plate.

You can read the entire op-ed here.