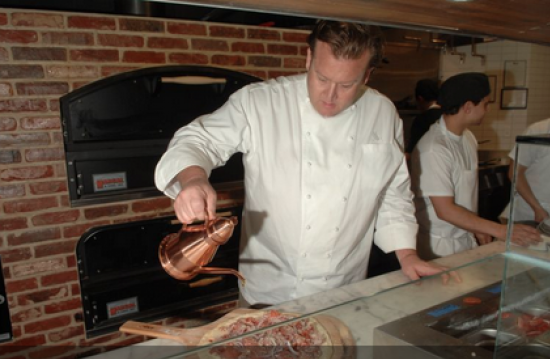 Ouch. Michael White, Total Celebrity Chef who made his fame with Marea and Osteria Morini, among others, recently expanded his mini-empire with Nicoletta, the first of what he hoped would be many more pizzerias making midwestern-style pizza.

That’s probably not going to happen anytime soon, since some of New York’s top critics mercilessly destroyed the East Village pizzeria in their reviews.

If you ever have any desire to harshly review a pizzeria owned by a celebrity chef who owns a two-star Michelin restaurant, here are some prime examples on how to do so.

Ryan Sutton of Bloomberg is efficient and likes to list things:

Too bad the pizzas have three fatal flaws. First: Nicoletta’s mozzarella lacks milkiness and tastes like a pre- shredded soy cheese-substitute fresh out of a plastic bag.

Second: The bread is chewy and insubstantial, with no depth of flavor. Third: the combined weight of the cheese, sauce, and toppings make the pies taste more like an exercise in Sbarro- style excess rather than Michelin-worthy balance.

Pete Wells, in his first official smackdown as the New York Times dining critic, gave out no stars because he has an insurmountable issue with the dough:

The crust is as strong as epoxy, and Mr. White piles it up with an abundance of toppings that would buckle an ordinary pie. In thickness and heft, a Nicoletta pizza resembles the September issue of Vogue.

…Mr. White has said he engineered the dough to stand up to the rigors of delivery and reheating with no loss of quality. In that, at least, he has succeeded. Warmed up a day or two later, a Nicoletta crust is just as stiff and bland as when it was fresh from the oven.

And yet the pizza seemed to be quite good — even Josh Ozersky and Ted Allen approved — when the restaurant first opened, if this Esquire post is to be believed.