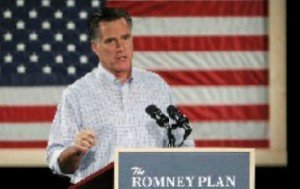 The gaffe has gotten very little media attention, which is as it should be, but the lack of coverage of this gaffe undercuts conservative complaints about the difference between how Republican flubs are covered, versus those of President Obama.

Referencing his earlier event in the Chicago area, Romney said: “We had a moment of silence in honor of the people who lost their lives at that sheik temple. I noted that it was a tragedy for many, many reasons. Among them are the fact that people, the sheik people, are among the most peaceable and loving individuals you can imagine, as is their faith. And of course, the person who carried out this heinous act was a person motivated by racial hatred and religious intolerance.”

Romney spokesman Rick Gorka said the candidate “mispronounced similar sounding words,” noting that he was clearly referring to the Wisconsin shooting and not trying to offend people of Sikh faith.

Gorka also pointed out that the comment came at the end of a long day of campaigning. Romney left his New Hampshire home at 7 a.m. and traveled between three states, holding three events and taping an interview before he took to the microphone at the evening finance reception in West Des Moines.

All very reasonable, and given the somber subject matter Romney was discussing, he was given the benefit of the doubt. Had Romney made a similar error in a different context, though, you can bet there would have been full-tilt gaffe coverage of it, since the confusion of Sikhs with Muslims is a particularly fraught one. That there wasn’t is an indication that the media’s gaffe selection process has to do with something other than partisanship.

Every time someone reports on a gaffe by a Republican, be it Sarah Palin, Michele Bachmann, or Mitt Romney, conservatives point to the same handful of Obama flubs, like reading “corpsman” as “corpse-man,” or saying he visited “all 57 states,” asking why the media doesn’t jump all over those, and concluding that the answer must be the dreaded Liberal Media Bias.

As this case illustrates, though, the criteria for a good gaffe have less to do with partisanship, and more to do with factors like how funny the gaffe is, to what degree it reinforces a particular narrative, or the setting in which it occurs. In this case, Romney’s mistake wasn’t funny, and it occurred within a context that was impossible to ignore, one which made it obvious he simply misspoke.