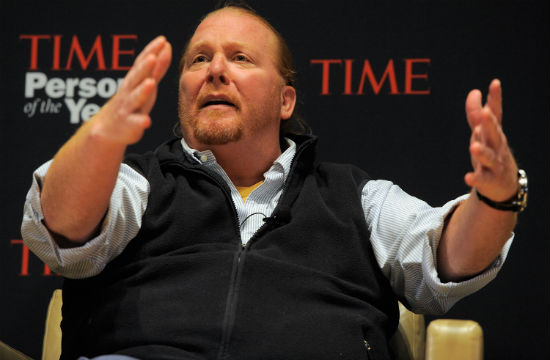 NY Post critic Steve Cuozzo called shenanigans on the concept of chef-as-activist, deeming it pretentious and hypocritical, while loving on Thomas Keller and Andoni Luis Aduriz for their New York Times interview, in a recent op-ed rant. In the NYT interview, Keller and Aduritz shared that they don’t particularly feel like sustainability or locavore-ism is something chefs should have to worry about in their quest to create and serve exceptional cuisine. Meanwhile, Mario Batali puts his family on self-imposed food stamp budgets to “spread awareness” about poverty while jet-setting around the world.

Specifically calling out the croc-sporting host of The Chew, Cuozzo writes, “The hypocrisy infects eateries high- and low-end. At protein-gobbling Mario Batali’s restaurants, on ‘Meatless Mondays’ — brace yourself — two vegetarian dishes are added to the menu.”

And then, there’s the celeb carbon footprint to consider. Cuozzo rips on locavore-obsessed chefs refusing to serve ingredients from far-off locations:

“Meanwhile, fame- and fortune-hungry chefs jet around the globe (oh, the greenhouse gases!) to open restaurants; they hype products sold in their names as well as ‘source’ ingredients they buy at discounts when they plug their purveyors on their menu. They fell countless trees to produce fat, ego-stoking ‘memoirs’ that are read by no one except reviewers, who skim them and sell them to the Strand.”

Burn. And, let’s not forget that sustainability nonsense:

“Those who tout ‘humanely’ raised cattle, fowl and pigs might be worthier of respect if they had a humane way of dealing with customers whom they force to wait hours — and with employees.

Restaurant after restaurant, including some of the city’s most famous, have paid out multimillion-dollar settlements to staff members who had accused them of illegally misappropriating tips for the owners or managers. The Mario Batali-Joe Bastianich empire recently settled for an unprecedented $5.25 million.

Enough about saving the earth, boys — see to your own backyards first.”

We know what you’re thinking: Wasn’t this whole conversation satirized in a bit on the pilot episode of Portlandia? Yes, friends. It absolutely, 100% was.