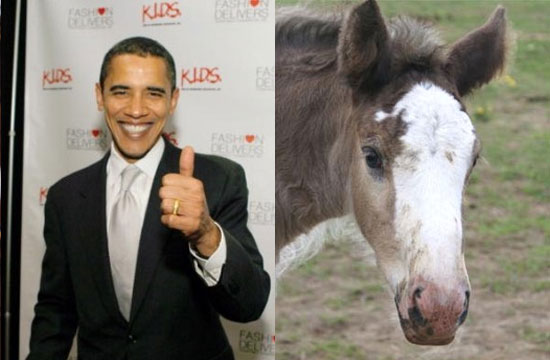 The best way to destroy something is to stop giving money to it, and President Barack Obama did precisely that when he revealed his 2014 budget proposals to Congress, with a provision that would block money from horse slaughterhouse inspection programs. Without inspectors present, slaugtherhouses cannot operate by law, and horse meat cannot be made. Essentially, the budget proposal kills the dreams of all Americans who wanted to figure out some efficient way to get rid of all those old horses lying around.

Seriously, America has too many horses: with 9.5 million in 2007, America leads the world in horse production (and surplus old horses). In fact, we have so many old horses, we have to send them abroad to be slaughtered in places like Mexico and Canada — the countries that supplied many of the European meat processors in the center of the horse meat scandal.

Earlier this year, spectators hoped that the US Department of Agriculture would reverse a temporary ban on horse slaughtering in the US and open an equine slaughterhouse in New Mexico, a.k.a. the Golden Years’ Retirement Farm for old horses. With Obama’s rejection of that idea, horse-lovers are stoked that they won’t have to send Black (Former) Beauty to a death panel.

To be pragmatic, the Humane Society of the United States, which opposes the idea of U.S. slaughterhouses out of principle, points out that nearly all American horses are often treated with drugs like phenylbutazone, which is used to treat inflammation in horses but can cause irreparable liver damage in humans. So, yeah, that might not be such a good idea. But then again, and this is only because we’re not fans of politically charged rhyming couplets, this is also from an organization that said this: “Horses belong in the stable and not on the table.” (We will eat an old horse out of spite because of that.)

Would you like to eat old horse, though? You can still lobby Congress to approve horse slaughter, much like this guy:

A. Blair Dunn, a lawyer who represents the owners of a New Mexico facility that was hoping to begin slaughtering horses for human consumption sometime this summer, said his clients were disappointed that the Obama administration had been swayed by horse advocates. “I know of a few members of Congress who are not likely to let it remain in the budget,” Mr. Dunn said. “All this means is more debate and more hardship for my clients because they’ve made these investments to modify their plant already.”