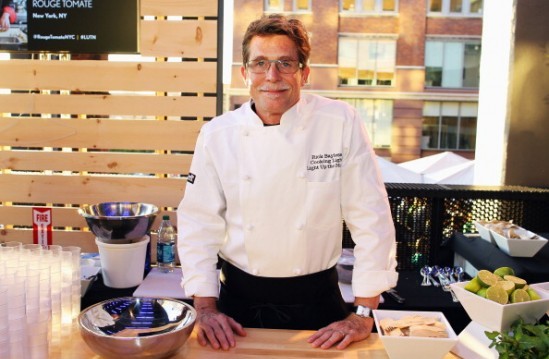 When we sat down with renowned Chicago chef Rick Bayless, we had the expectation that we’d talk briefly about the James Beard Foundation’s upcoming conference on public trust in food, where he’ll give the keynote address. While we had a surprisingly in-depth, nearly dissertation-level discussion on that topic (coming soon!), we also brushed on the subject of the American Culinary Corps, of which he was a founding member, as well as his old customer and the hottest topic this month: President Obama.

I wanted to ask you a little about the [U.S. State Department’s] Culinary Diplomatic Corps. A lot of people have responded pretty positively to it, but I’ve seen criticism from outside the food world that calls the program an “elitist” effort. How would you respond to that?

Well, isn’t all diplomacy then elitist? I mean, because then you have high level people that are dealing with other high level people …? If you bring in the best chefs of your area, your country, to bring people around the table so you can get to know them better in a way that doesn’t so much involve words as it does flavor, and the history of flavor, and the experience of flavors and textures.

It seems to me that no matter how you do that, it’s the same for all people. We all have to eat. We all have to share food with other people at some point in our lives. We know that once we’ve shared a meal with certain people, our relationship has changed, and that we understand each other in different ways. And to me, that is the whole point of this program — it’s to be able to bring people together around food.

I think you could do it with having grandmas come in and do it, but I’m not sure that’s necessarily going to fit into the rubric of a great diplomatic kind of a thing. Whereas you can find chefs who can do the same kind of thing, and it would fit in beautifully, because they know how to handle big numbers of people and feed them appropriately, and all that.

You happened to have catered a large diplomatic event once in your career.

I certainly did. And it was really amazing. And I have to say, I’m not responsible for the success of that service. It was Cris Comeford, the White House Chef, that taught me everything that I needed to know about pulling off that event, and she was dead on the money. You have to have someone that’s extremely professional and experienced to pull that kind of thing off. She’s amazing. I really, really love her.

Speaking of the Obamas, can they drop into Topolobampo whenever he wants, or is there an actual protocol that  has to happen before they show up?

They immediately set up a scanner at the front door, they lock the back door, I mean — we’re pretty much in lockdown at that point. They bring in all the Secret Service, and they bring in a chef who’s watching everything that’s being made from that time on, because you don’t have any time to mess anything up after that.

That is kind of crazy. I think you’d prefer the unannounced visit.

Oh yeah! Anytime. He had a really nice time, and was incredibly nice — he came back to the kitchen, and had all the cooks stand around, and took pictures with everybody. He was just super, super nice.

Are you planning on throwing him one of those $40K per plate, Jay-Z fundraisers any time before the election?

We haven’t been approached to do that, no.

Will you let us know if that happens?