Dawn Best, whose mother died in a nursing home that she said was overwhelmed by coronavirus patients, told Fox News Monday that media outlets, including NBC News, forced her to change her interview responses so as not to blame New York Governor Andrew Cuomo for her mother’s death. Best told Fox & Friends co-host Brian Kilmeade that media outlets essentially forced her to refer to “New York” instead of Cuomo directly.

“A woman whose mother died in a New York nursing home last April says NBC News told her to change her words during an interview on the state’s crisis,” Kilmeade introduced the segment.

However, video of the full interview between Best and an NBC reporter, obtained by Mediaite, does not match Best’s account.

According to Best, who is a friend of Fox News senior meteorologist Janice Dean, Best’s mother died of neglect – specifically, dehydration – after coronavirus patients were sent to nursing homes in the early days of the pandemic. The controversial March 25, 2020 directive prohibited long-term care facilities, such as nursing homes, from denying re-admission of a resident solely because of a positive (or suspected positive) Covid-19 diagnosis. Cuomo reversed the order, after a backlash, in May 2020.

Dean, whose mother-in-law and father-in-law both died from coronavirus while in nursing homes, has been an outspoken critic of Cuomo and his handling of the coronavirus in long-term care facilities.

Best told Kilmeade that she has often been asked to withhold criticism of Cuomo in interviews.

“I kind of got used to it because the media was never letting me say ‘Governor Cuomo’ all along, and it was being cut out of every interview that I was in,” Best said. “I started starting every sentence that they asked with ‘Governor Cuomo’ so they couldn’t do that to me, so then they were forced to literally ask me to cut out Governor Cuomo’s name.”

“Lester Holt’s show wasn’t the only one to do it,” Best said. “So what happened specifically on that show was I was telling them that Governor Cuomo failed us, his book should be named — not “Lessons in Leadership”, it should be “Lessons in Failure”. She stopped me and she said to me, can you say that a different way without Governor Cuomo’s name and just say, New York failed you? So I had no choice. I had to say New York failed me.”

A Mediaite review of the full video of the interview, provided by an NBC source, shows that it was Best – not the NBC reporter, Kristen Dahlgren – who asked to re-do her answer (emphasis added):

Dahlgren: How big of a failure do you think New York’s response was to COVID when it comes to nursing homes?

Best: Okay. Governor Cuomo has written a book ‘Lessons In Leadership’. He knew that the numbers were twice as high. And he was hiding it. And he was hiding it because what we’re gonna find out and we’re finding out is that New York State had was such a failure. His handling – his book’s named ‘The Lessons In Leadership,’ I believe. His book should be ‘lessons in failures’. New York State was a tremendous failure. Most of the so many unnecessary deaths, the nursing home deaths were preventable. They they didn’t, there was a certain amount that obviously would have happened because of their natural natural circumstances. But they were, they were set up and I didn’t say that as well as I could. If you want to ask me in a different way I could.

Best: New York State failed my mother and failed 1000s of people’s mothers and fathers and I know many of these people, and I watched their suffering every day. And they are still suffering. Now, there’s people in nursing homes that they haven’t had visitors in a year. My mom would not have fared well. I’m watching people die every day. Because there there’s there’s more deaths because of the failures of New York state that really needs to be addressed. It’s a very, very big failure.

The Nightly News segment itself was fairly critical of Cuomo. It included Dawn Best stating, “A third grader would know not to put Covid patients in with the most vulnerable,” and noted that the governor declined to comment on the controversy.

At one point, the segment included B-roll of Dawn Best holding a sign that said “Cuomo killed my mother.” 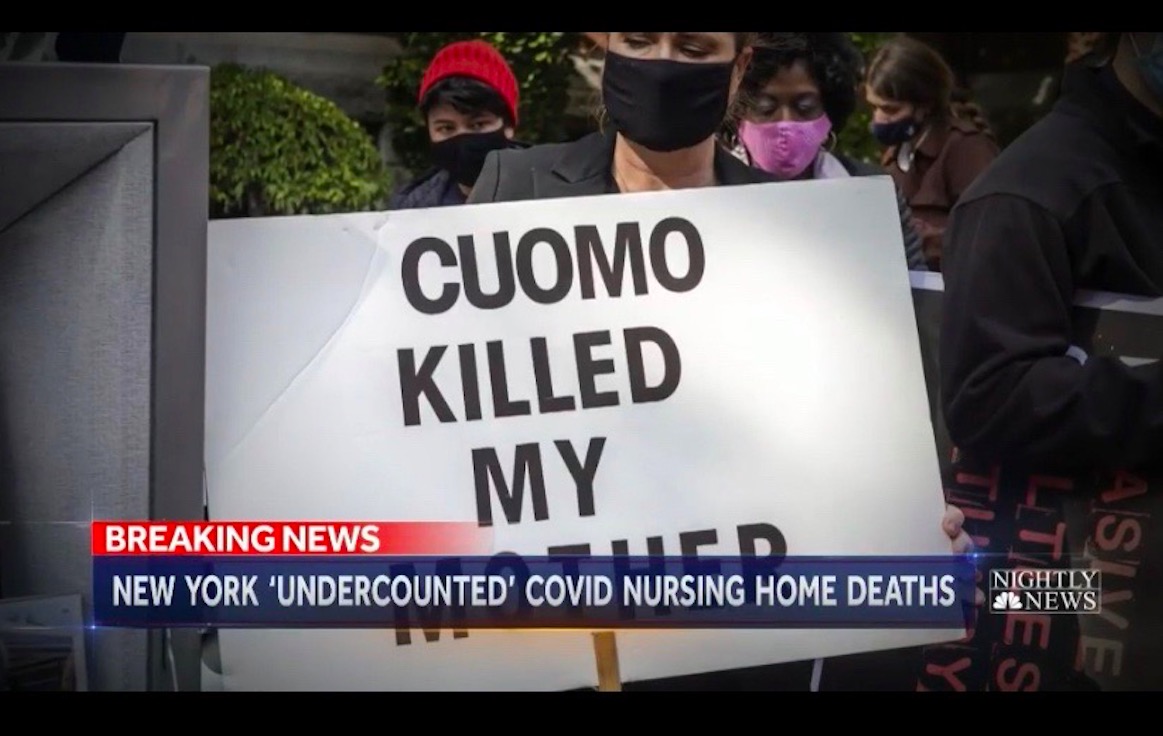 A Fox News source told Mediaite that Fox & Friends reached out to NBC News for comment regarding Best’s claims but did not receive a response.