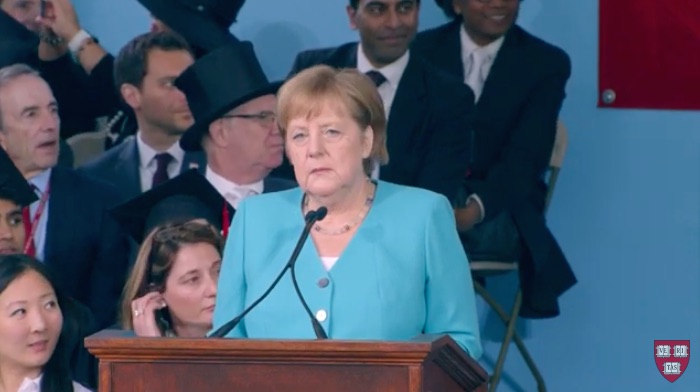 German Chancellor Angela Merkel offered a number of not-so-subtle rebukes of President Donald Trump and his policies during her commencement address at Harvard, and earned a standing ovation from the crowd when she condemned the idea of describing “lies as truth and truth as lies.”

Merkel, who spoke to the Harvard audience through a translator, emphasized the need for honesty in public life and alluded to the university’s Latin motto, Veritas. “What better place to begin to do so than here, in this place, where so many young people from all over the world come to learn, to research, and to discuss the issues of our time under the maxim of ‘truth.'”

“That requires us not to describe lies as truth, and truth as lies,” Merkel added. This line elicited loud applause from the Harvard crowd, who then stood up in solidarity with her thinly veiled shot at a US president with which she has had a very contentious relationship.

Pivoting from that point, the German leader then built an extended metaphor around rejecting one of the president’s signature political totems, as she dismissed “walls” as a barrier to progress, peace, and democracy.

“It requires us not to accept shortcomings as our normality. Yet what, dear graduates, could stop you, could stop us, from doing that? Walls. Walls in people’s minds, walls of ignorance and narrow-mindedness,” Merkel said. “They exist between family members, as well as different groups within the society: people of different skin colors, nations, and religions. I would like to see us break down these walls.”

Watch above, via Harvard University. (The relevant portion begins at the 23:25 mark.)