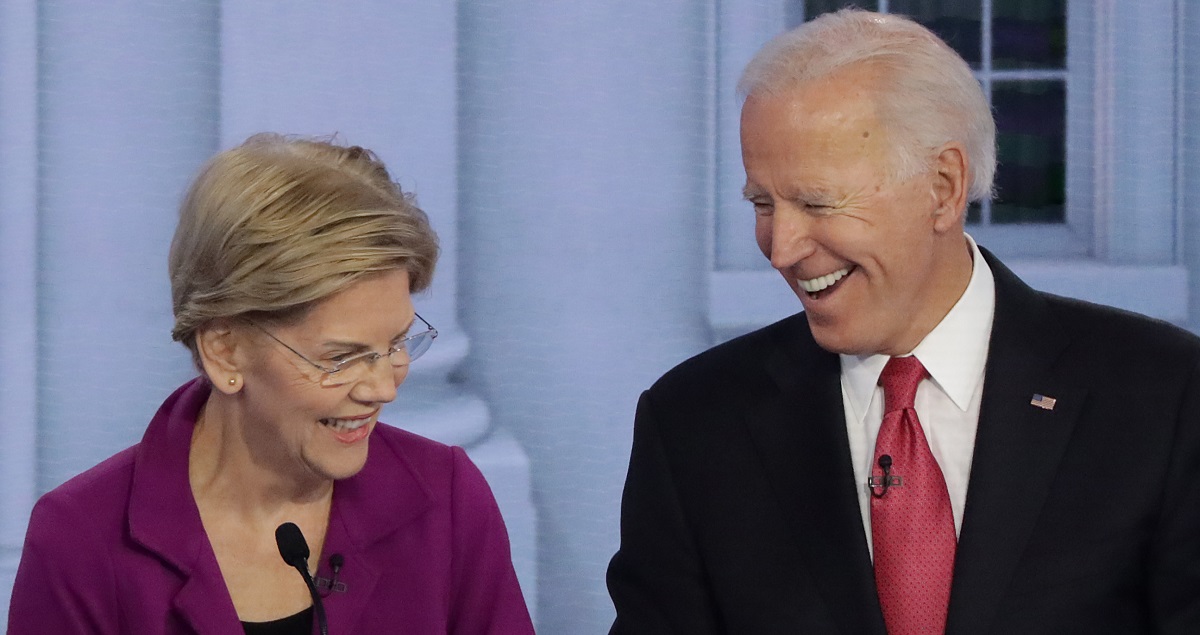 Massachusetts Senator and former Democratic presidential frontrunner Elizabeth Warren hasn’t made an official endorsement yet, but she gave some ringing praise that effectively acknowledged that former Vice President Joe Biden will be the person to potentially beat President Donald Trump.

During an interview on SiriusXM’s signal Boost show with former senior Hillary Clinton aides Jess McIntosh and Zerlina Maxwell, Senator Warren took a few minutes to discuss the 2020 presidential race, first offering a familiar response to speculation about the veepstakes:

JESS MCINTOSH: A lot of us want you to have as big of role as possible in whatever administration comes next and is required to clean up the Trump mess. It’s going to be the biggest, the biggest goal. Do you see a role in the cabinet? I’m sure you hear the vice presidential chatter. Would you prefer Treasury Secretary? Where do you see yourself fitting in in the clean up effort that we are going to need nationally when it comes to leadership?

SEN. ELIZABETH WARREN: I think we’ve got someone like Joe Biden in there, we’re going to have good, strong people. For me, and I appreciate the kind and generous words, but right now, and we are in the middle of this crisis and that’s where I’m keeping my focus. You all know me. I thought I was supposed to spend my whole life as a school teacher. That’s what I wanted to do. And then thought it would be okay, I’d go over and teach in law school. I never thought I was going to be in this part of government. I thought I’d work on this set of issues about what was happening to hardworking families, what was happening to African Americans Latinx families and and communities, especially during the last financial crisis. What was happening to women and young people during the last crisis and beyond. So for me, I’m glad to be here right now to try to help. It’s all about public service and I just want to make this an America that works better, not just for a handful at the top, but works better for everyone. And that’s what I’m going to stay focused on wherever I can be helpful.

Senator Warren went on to imagine the Biden presidency that she hasn’t officially endorsed, but to which she is obviously looking forward. She praised Biden as a “good and decent man,” and said that “as a leader, he would not be putting himself first.”

Warren also said that “we can expect” the same sort of leadership that the country saw under President Barack Obama:

SEN. ELIZABETH WARREN: Every time that that Vice President Biden gets out there – out there – obviously he’s confined like everyone else.

SEN. WARREN: Metaphoric. That’s right. Every time he has a chance to talk I’m reminded though he is a good and decent man, and as a leader, he would not be putting himself first. He would be putting first the interests of the American people. He would understand at a human level of what this pandemic means to Americans, and I would have no doubt that he would both be doing everything he could to have a strong response, and that he would run a competent government with smart people to help get that done. It’s a crisis like this that reminds us how much we need leadership. I think that the vice president when he talks, reminds us of good and decent leadership. And of course he reminds us that President Obama was here just three and a half years ago, and he saw us through a crisis starting back in 2009 with steady, thoughtful, smart leadership, and that’s what I think we can expect from Vice President Biden.