Journalists Call Out Racism in Trump's Attack on Elijah Cummings 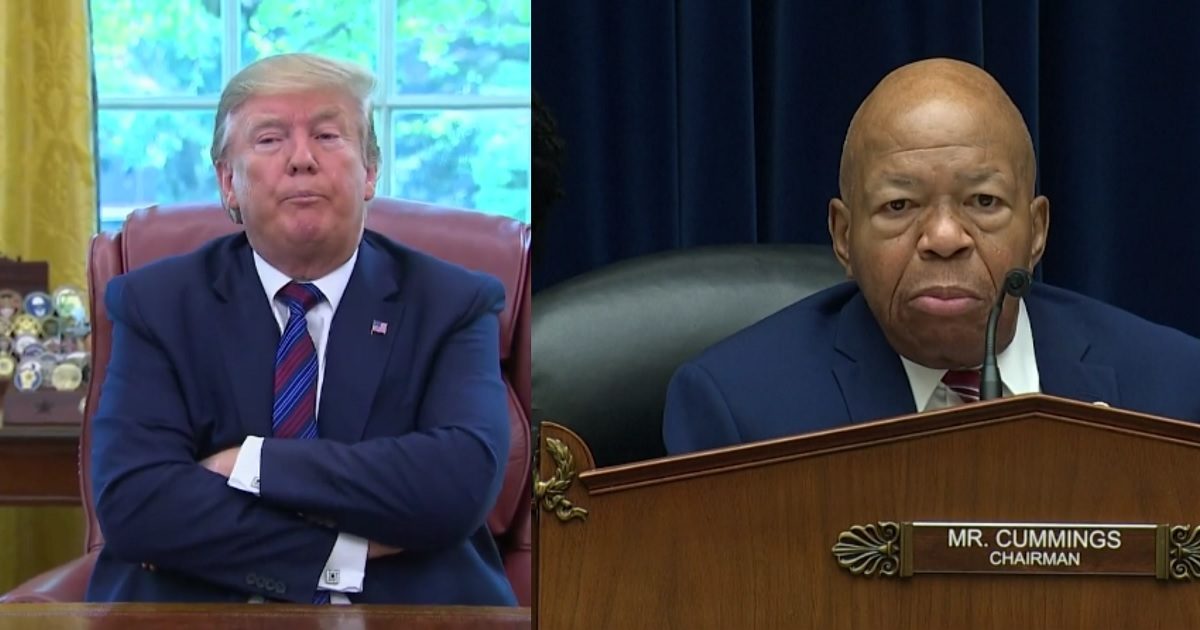 Prominent journalists and media figures were quick to point out the racist dimension of President Donald Trump’s attack on Rep. Elijah Cummings, whom he called a “brutal bully,” and whose district — which includes Baltimore — a “disgusting, rat and rodent-infested mess.”

On Saturday morning, Trump wrote, in a series of tweets, “Rep, Elijah Cummings has been a brutal bully, shouting and screaming at the great men & women of Border Patrol about conditions at the Southern Border, when actually his Baltimore district is FAR WORSE and more dangerous.”

“Why is so much money sent to the Elijah Cummings district when it is considered the worst run and most dangerous anywhere in the United States. No human being would want to live there. Where is all this money going? How much is stolen? Investigate this corrupt mess immediately!” he concluded.

To varying degrees, journalists — including White House correspondents — and other media figures called out Trump’s attack as racist.

Just going to share this map of Rep. Cummings’ district for no particular reason. A great slice of Maryland with urban, suburban and rural areas. pic.twitter.com/acbj3yFvxP

Like CNN’s Victor Blackwell did in an emotional commentary, The Washington Post’s Phil Rucker connected Trump’s attack with others he has made on legislators of color.

Trump, who recently attacked four congresswoman of color because he said they trash-talked America, calls one of America’s oldest cities “a disgusting, rat and rodent infested mess” https://t.co/mm2bLBJQBq

The New York Times’ Peter Baker noted, in a quoted article, that Trump “has a history of characterizing black areas or African nations in terms like ‘filthy.’” Others noted similar trends.

‘Mr Trump has a history of characterizing black areas or African nations in terms like ‘filthy,’ writes Peter Baker. https://t.co/YXbBPhtKuP via ⁦@nytimes⁩

Several journalists pointed out that Trump’s attack consisted of the same America-bashing that he has falsely accused others of, including The New York Times’ Maggie Haberman.

POTUS claimed his issue with the Squad was how they talked about America. Cummings district is part of America. https://t.co/LF5YrsvvxF

“No human being would want to live there.” Imagine the reaction from the right-wing outrage machine if @IlhanMN had made that comment about a slice of America. They quite literally would tell her to “go back.” https://t.co/f1jFULnjqm

One fun fact about MD-7 is it’s located in the United States of America, a country that enjoyed decades of steadily improving air quality until Donald Trump became president. https://t.co/wVUBEytHpc

Others were more direct, by degrees.

There are beautiful suburban stretches within this district and some fine urban areas. But since Elijah Cummings is an African American, @realDonaldTrump seems to assume he represents a district with nothing but rot and crime. What do you call someone like that? https://t.co/9yXVm6Gjkg

What’s most disgusting is Trump issuing order to target critics, minorities, politicians for abuse, because of their ethnicity. It became the most visible with @AOC @ImranKhanPTI @RashidaTlaib , but it doesn’t end with them.

As I’ve written, Trump employs open racism not only b/c he wants to but b/c he has to- he must turn out more of the voters who respond to overt bigotry b/c the bigotry (& other division) he’s already shown has alienated too many voters satisfied w/the economy. He’s on a treadmill https://t.co/oZ0wRYLTJt

As I’ve written, Trump employs open racism not only b/c he wants to but b/c he has to- he must turn out more of the voters who respond to overt bigotry b/c the bigotry (& other division) he’s already shown has alienated too many voters satisfied w/the economy. He’s on a treadmill https://t.co/oZ0wRYLTJt

Recent polls have found that a solid majority of Americans believe that Trump is a racist.