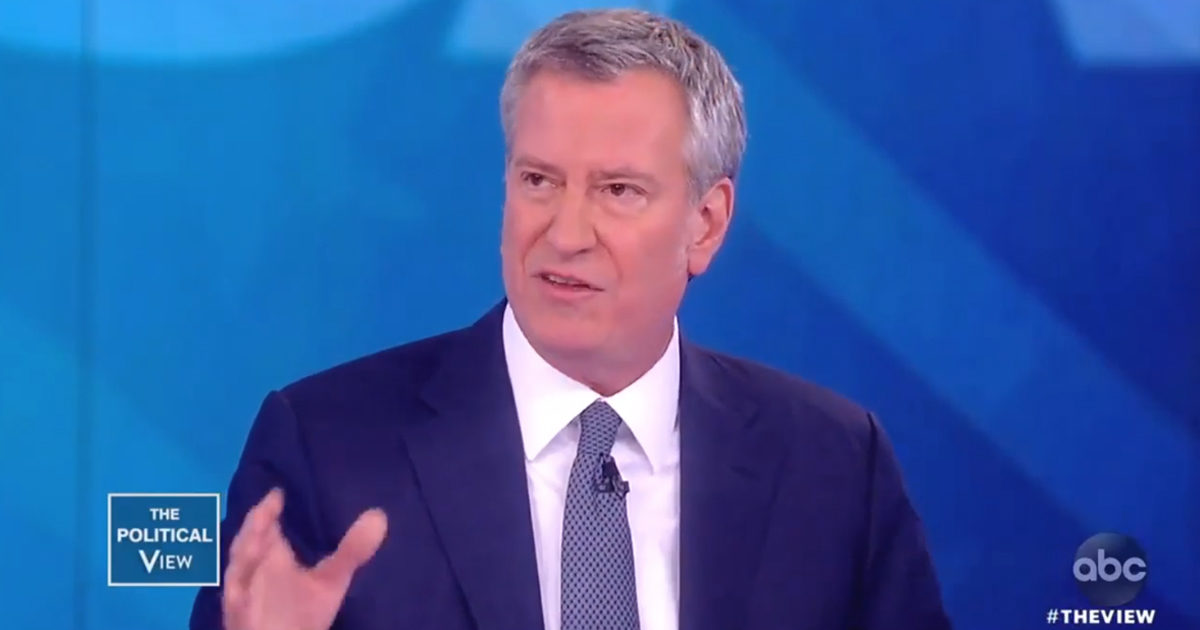 Mayor Bill de Blasio is getting blowback for threatening to arrest Jewish citizens of New York City who appeared to ignore social distancing orders while mourning the death of a recently passed rabbi.

Supporters of Rabbi Chaim Mertz, who reportedly died from the coronavirus, gathered Tuesday evening to mourn the passing of the religious leader, flouting the social distancing guidelines put forth by both state and city municipalities.

The New York City mayor put out three tweets about what he deemed to be an “absolutely unacceptable” gathering aiding the coronavirus outbreak and ultimately threatened arrest of those who ignored his order. Images of the funeral gathering:

Tipster says this is the Williamsburg funeral today of Rabbi Chaim Mertz who died from COVID-19 pic.twitter.com/wsTvCrlzpb

Something absolutely unacceptable happened in Williamsburg tonite: a large funeral gathering in the middle of this pandemic. When I heard, I went there myself to ensure the crowd was dispersed. And what I saw WILL NOT be tolerated so long as we are fighting the Coronavirus

The following up tweets addressed members of the “Jewish community” who ignored warnings and included his instructions to the NYPD to summons or arrest those who gathered in large groups:

My message to the Jewish community, and all communities, is this simple: the time for warnings has passed. I have instructed the NYPD to proceed immediately to summons or even arrest those who gather in large groups. This is about stopping this disease and saving lives. Period.

His last tweet in the thread reiterated the context:

We have lost so many these last two months + I understand the instinct to gather to mourn. But large gatherings will only lead to more deaths + more families in mourning. We will not allow this. I have instructed the NYPD to have one standard for this whole city: zero tolerance.

But as is often the case on Twitter, context is often lost. And the second tweet, even in context, was a questionable targeting of “members of the Jewish community” followed by a threat to arrest them by the NYPD. This was not lost on many who expressed ridicule and outrage over de Blasio’s tone-deaf tweet. To wit:

Hey @NYCMayor, there are 1mil+ Jewish people in #NYC. The few who don’t social distance should be called out — but generalizing against the whole population is outrageous especially when so many are scapegoating Jews. This erodes the very unity our city needs now more than ever. https://t.co/jcYO9QQred

Really? Are we gonna call out blacks next? @NYCMayor needs to chill. There is enough anti-semitism and xenophobia and racism already being stoked up by the fear this virus has brought. Shameful for a progressive mayor to add to it. https://t.co/ZzOuEiaIq7

I love that de Blasio posits a unitary “Jewish community” in NYC. He imagines a Friday night where the editors of the Forward are gathering with dozens of Hasidim plus Howard Schultz and David Duchovny https://t.co/6JZetdIYU7

The NYPD are not your personal Nazis. They should tell you to pound sand and stand guard to let people worship.

You lowlife cretinous bobblehead. There’s only one community you would address this way. And it’s the one that just went through a pogrom on your watch, as you let it happen.

The Jewish people will survive your term in office, despite your best efforts. Am Yisrael chai. https://t.co/mcOcjnWdFf

I can’t imagine de Blasio saying this about any other community. It’s pretty amazing. And for the record, MANY of the leaders of the Jewish community have taken strong stands on social distancing. https://t.co/aqlL7Yr8Xs

This thread is about context, also:

1/ It seems worth being precise about why this tweet is awful, because I see a lot of people criticizing it without actually specifying why: First, the obvious… Jews are not the only ones flaunting social distancing orders. Identifying them like this is just scapegoating. https://t.co/SU7xD3G7Cf

2/ Every neighborhood with every kind of person in NYC has broken the social distancing rules. I’m not going to identify specific groups here, but I have literally seen every race, religion and class congregate outside since the orders were in place in NYC.

3/ This tweet comes in the context of an unthinkable rise in anti-Semitism across NYC and the surrounding area. I mean, it wasn’t so long ago Jews were shot up in Jersey City and Monsey. That is SO fresh in the minds of the Jewish community here.

4/ So not only is the mayor identifying and scapegoating Jews, he’s doing it at a time when the Jewish community here feels particularly at threat from its neighbors and citizens. I am not a religious/Orthodox Jew, but I’ve heard some horrible firsthand stories from numerous ppl.

The NYPD later confirmed to numerous outlets that while they dispersed the crowd, no arrests were made.