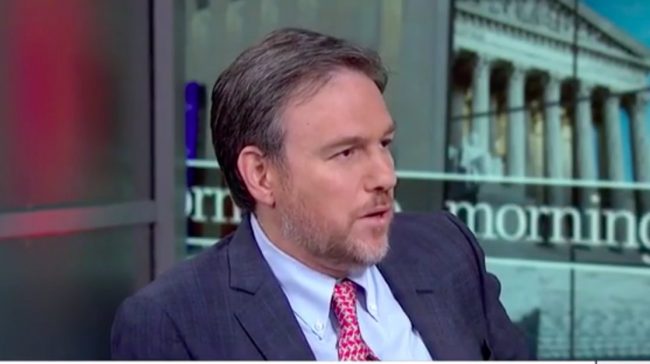 New York Times columnist and ostensible free speech champion Bret Stephens wrote a vaguely threatening email to an associate professor at George Washington University — and cc’ed the university provost — who had jokingly referred to the op-ed writer as a “bedbug” on Twitter.

The professor, Dave Karpf, who studies media and public affairs, published a screenshot of the email he received Monday night from Stephens, who claimed an unnamed “someone” had “just pointed out” Karpf’s insult to him, complained that the professor had “set a new standard” for poisoning the discourse. The Times columnist went on to effectively physically challenge Karpf, inviting him to “come to my home, meet my wife and kids, talk to us for a few minutes, and then call me a ‘bedbug’ to my face.”

Karpf’s initial joke on Twitter, posted just hours before, was in response to news of a recent bedbug outbreak in the New York Times newsroom.

Stephens’ over-the-top response to a Tweet that notably did not use his Twitter handle, as well as the not-so-subtle attempt to get Karpf in trouble with the professor’s boss at the college, seemed to run counter to the proclaimed free speech champion’s disgust with thin-skinned “PC culture” and societal “safe spaces” where no one has a sense of humor anymore. Notably, some of Stephens’ past op-ed headlines at the Times have included titles such as:

“The High Church of the Low Blow”

“Free Speech and the Necessity of Discomfort”

“The Dying Art of Disagreement”

The tetchy, how-dare-you tone and speak-to-your-manager snitch move by Stephens came across as more than a little hypocritical to many media watchers online. This reaction was especially true among women and people of color who routinely face — and ignore — rape and death threats they receive on Twitter.

Bret Stephens is using his NYT platform to threaten a guy for a harmless joke. pic.twitter.com/N5Kk50qmdL

The next time you read a Bret Stephens peon to free speech, including the need to tolerate hate speech, just remember he emailed the provost of a university to let him know a faculty member had joked he was a bedbug. pic.twitter.com/rLaaSA6l35

Bret Stephens, a guy who professionally laments “PC culture” and “safe spaces” is upset someone jokingly called him a bedbug on Twitter. https://t.co/GzUSTLtbej

Subject line: From Bret Stephens, New York Times
Dear Merriam-Webster twitter account,
It was brought to my attention that you subtweeting me. Would you dare do this in front of my wife & kids? Put up your dukes, dictionary!
Bret Stephens
cc: Your manager. https://t.co/D021TA7lLG

Bret Stephens, defender of academic freedom, emails a professor who mocked him and CCs his provost. Also Bret is in fact several billion bedbugs is a trench coat. https://t.co/JzAr4CjmiM

Since we’re all picking our favorite parts of this Bret Stephens email, I will go with him saying calling someone a “bedbug” sets a “new standard” for nastiness on Twitter. This is the sort of risible analysis we would expect in one of his columns. https://t.co/crJE84Wiaj

When a woman on Twitter learns the slur Bret Stephens flipped out about is “bedbug” pic.twitter.com/HK5xBgeiwa

If Brett Stephens is this upset about being called a “bedbug” I welcome him to read my emails, in which I’m regularly referred to as a cunt, a bitch and a whore. https://t.co/kIwL915vNY

sometimes i think of the deluge of cruelty folks like jemele hill and jamelle bouie and other folks get and they basically have to sit on their hands. meanwhile bret stephens got called a third-grade insult and tattled to the dude’s boss. he would never make it if he was us.

same rule for me: if you’ve ever mocked me online, please go have dinner at Bret Stephens’s house