Protesters Shouting at DC Diners in Viral Videos Get Roundly Criticized on Social Media: ‘This Will Not Win People Over’ 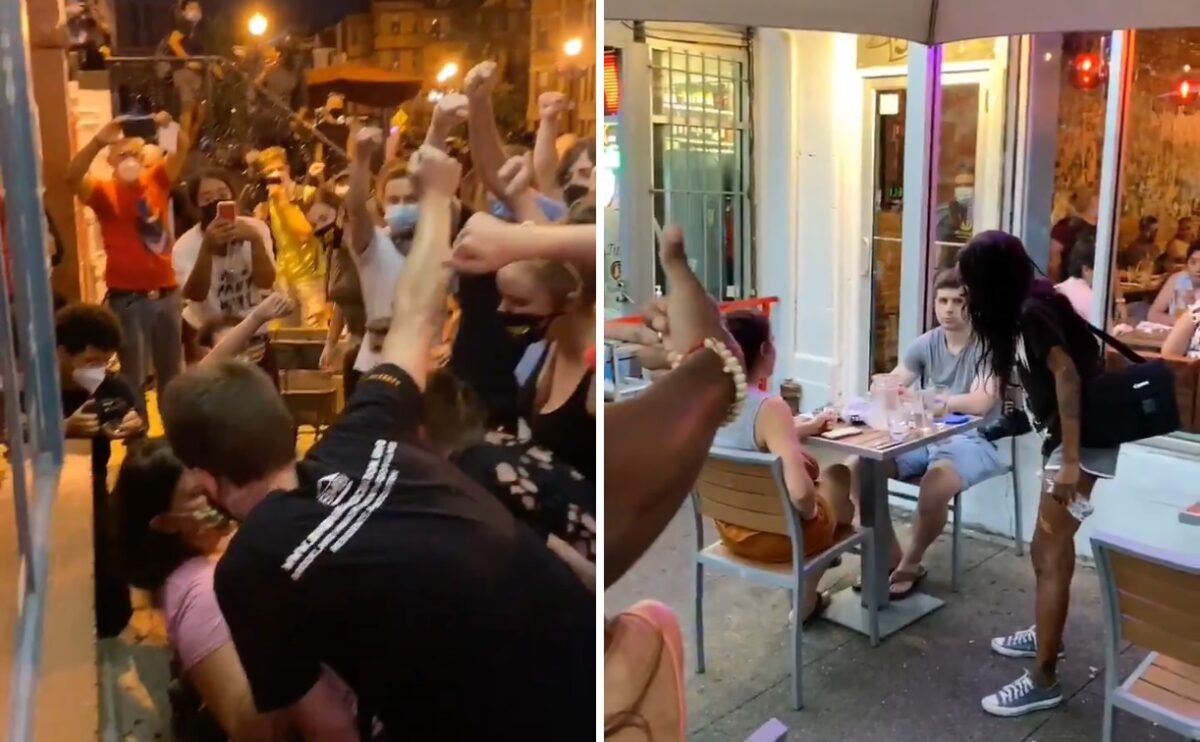 A Washington Post reporter’s thread on DC protesters confronting and shouting at diners outside received a lot of attention on social media Tuesday.

WaPo’s Fredrick Kunkle shared videos of the confrontation Monday and tweeted that protesters were screaming at patrons to raise their fists in solidarity.

3) Modiano, who had been yelling at Victor and moments later identified himself as a citizen journalist who writes for @Deadspin, told Victor he couldn’t understand why she was the only diner in the area who wouldn’t comply. “What was in you, you couldn’t do this?”

5) “In the moment, it didn’t feel right,” Victor said, adding that she also could understand their anger. “I wasn’t actually frightened. I didn’t think they’d do anything to me,” she said. “I’m very much with them. I’ve been marching with them for weeks and weeks and weeks."

The protesters received quite a lot of criticism on social media:

This is not anti-racist activism, it's a thuggish power trip that does nothing to help the actual people it pretends to be about. Note that everyone engaged in this harassment is white. https://t.co/Gmw74Ft6uS

imho this is not a good tactic https://t.co/ZE1tys75SD

This is to “political action that will effectively limit the powers of agents of the state and make it easier to get bad police off the streets” as a baked potato is to the works of Mozart.

Another in-kind contribution to the Trump campaign. https://t.co/nQWvabqM75

Really though, the brazen witlessness of these cosplaying activists aside, what happens when they do this to the wrong person? Someone who suffers from anxiety attacks. Someone who just lost a loved one and is mourning. Someone who carries a weapon. What then? https://t.co/K8MonGHYOR

This white-on-white violence is getting out of control. https://t.co/fy5YWQYP34

This bullying is 1) pathetic; 2) dangerous; and 3) utterly destructive and counterproductive to the protesters' professed aims — unless confrontation is the only purpose. https://t.co/T8R4YFpkcX

People who think this kind of stuff is going to help their cause have completely lost touch with reality. https://t.co/znZJb26VFH

The Evergreen College mindset has left the campus. https://t.co/mOTGPdUf6l

This gathering (might as well have been) pad for by the Committee to Reelect Trump https://t.co/GcvbIvDoRP

Yeah this is cuckoo and counterproductive and there are indeed a minority of people who seem to be attracted to left movements because they would love to run a reeducation camp. Worth mentioning that the very white crowd is noticeably not super reflective of DC's actual populace. https://t.co/oFmmIMnzMo

This will not win people over to your cause: https://t.co/F49AKf1yYK

What does this do to stop injustices against Black Americans? Nothing! https://t.co/FuL5fYLhel