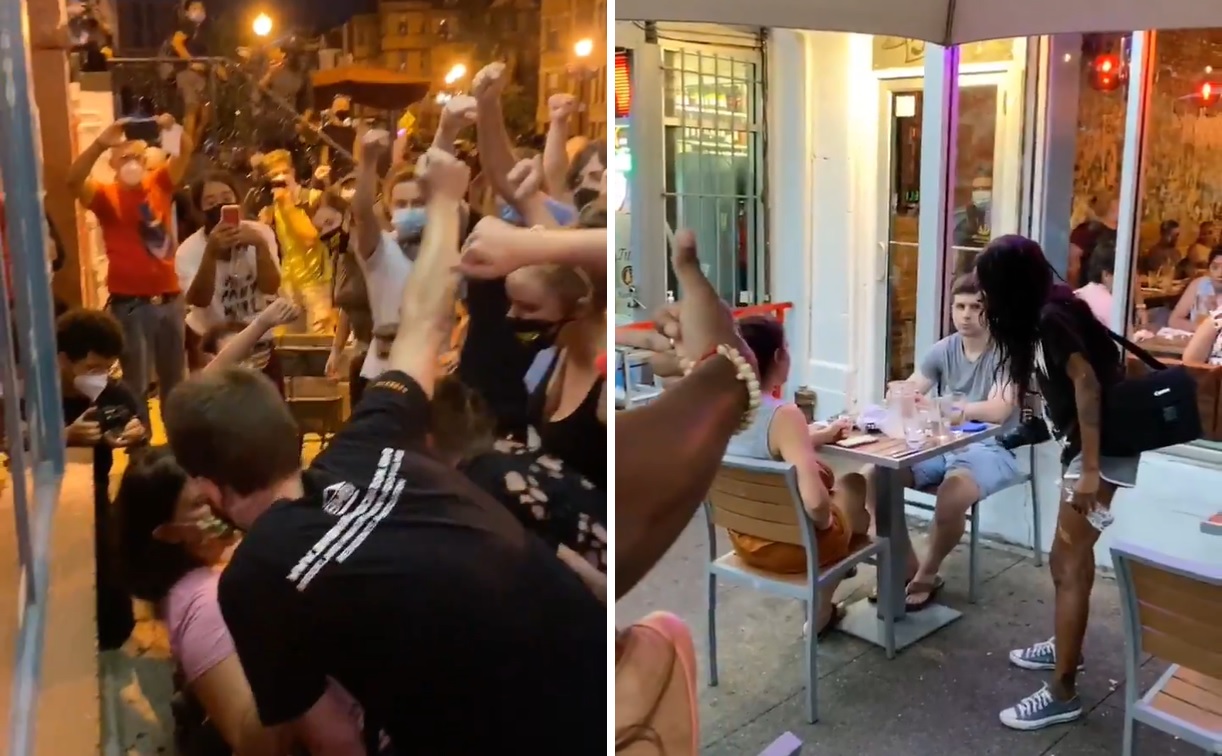 Two videos showing Black Lives Matter protesters harassing and screaming into the faces of people eating outside went viral on Tuesday amid riots and protests over the police shooting of Jacob Blake.

In one video, reportedly shot in the Adams Morgan neighborhood, protestors demanded a woman raise her fist. When she did not comply, they circled around her and screamed.

2) In Adams Morgan, protesters screamed at Lauren B. Victor for several minutes for refusing to raise her fist with them.
“Are you a Christian?” a female protester demanded.
“Good for you — you stood your ground,” Chuck Modiano said sarcastically as the crowd moved on.

Washington Post reporter Fredrick Kunkle interviewed the woman, who said that while she has been marching with Black Lives Matter protesters for weeks, she didn’t want to be coerced into the expression of support.

5) “In the moment, it didn’t feel right,” Victor said, adding that she also could understand their anger. “I wasn’t actually frightened. I didn’t think they’d do anything to me,” she said. “I’m very much with them. I’ve been marching with them for weeks and weeks and weeks.”

Another video of the incident went viral:

Another incident — also apparently shot in Washington, D.C. — showed a group of protesters appearing to harass a couple eating outside a restaurant, as a woman screamed into their faces without a face mask on amid the current coronavirus pandemic.

Other videos showed men, women, and children appearing to raise their fists while eating outside, seemingly at the behest of protesters.

Social media users — including politicians, commentators, and journalists — reacted in horror to the videos.

This is completely unacceptable and doesn’t bring meaningful police reform one inch closer. It harms the cause.

And in a pandemic, that kind of contact rolls the dice with Covid. It’s threatening. https://t.co/FgqecrR7F2

My God. Last night DC protesters intimidated people in a restaurant. Ordered them to raise their fists in protest. Anyone who disobeyed was viciously denounced for supporting “white supremacy.” Distressing video of bullying posing as activism.?? https://t.co/PUODHoJUJJ

This is vile and un-American. https://t.co/TQIoOpuIa2

Give not one inch to this fascist mob. https://t.co/hKsn6ypXMq

What eating out in DC looks like now, apparently. https://t.co/Pguhvm8d5o

Here are more protestors on the streets of DC demanding a woman raise her fist against “white supremacy.” They are actually proud of this shaming and bullying. They promote it as a job well done ? pic.twitter.com/mJvL4bEx97

I hate these people so freaking much

studies show shouting aggressively is the best persuasive tool to have others see things your way and join up in your cause https://t.co/37PTKUQlQq

Good for him. Don’t ever let mobs of cowards intimidate you. https://t.co/uw34oAIUv1

Here’s a fuller clip with clear audio. This is insane. And no one comes to the defense of the person being swarmed on, who has done nothing to deserve this. This is cult behavior. This is what a moral panic powered by technology looks like: https://t.co/5fvG1NPAD4

My controversial opinion is that compelled speech is bad. https://t.co/4pgRcPTe0A