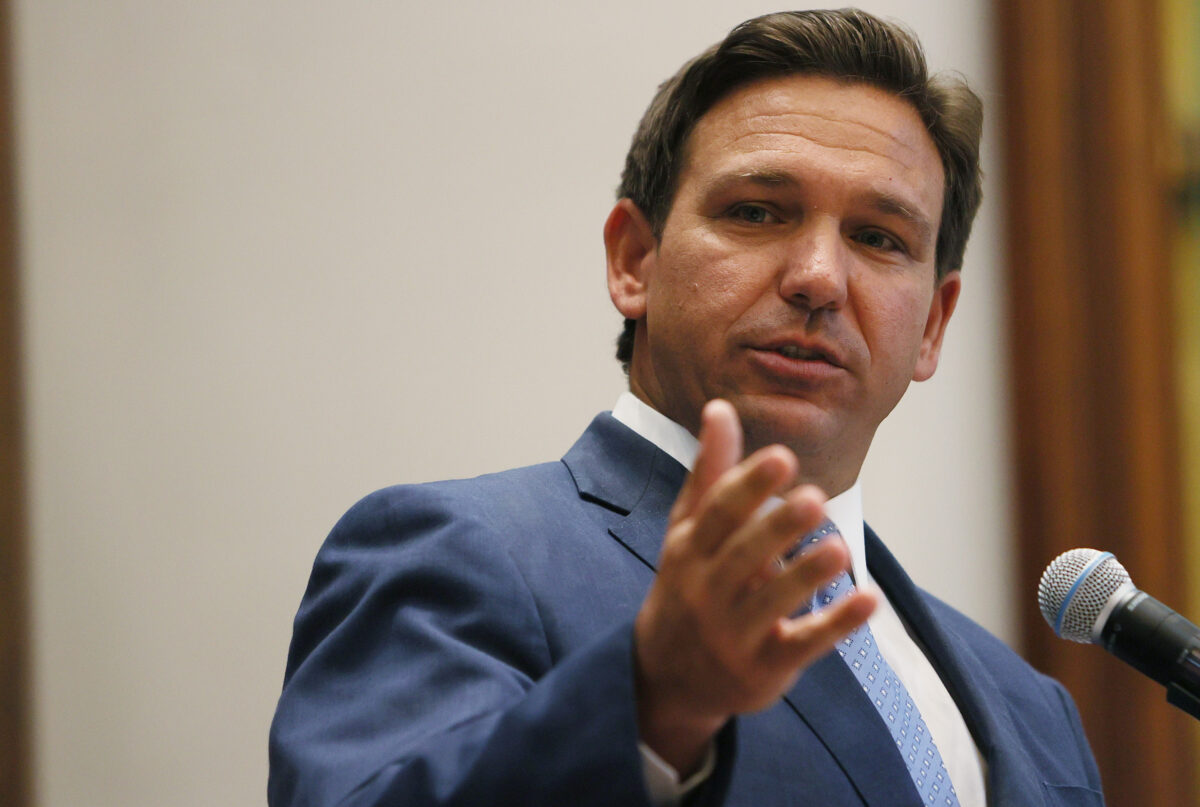 The first of multiple expected lawsuits challenging Gov. Ron DeSantis’ (R-FL) repeal of the Reedy Creek Improvement District (RCID) was filed in a federal court in Central Florida on Tuesday.

The complaint was filed in the U.S. District Court for the Middle District of Florida by four taxpayers in the counties affected by the dissolution of the special taxing district that governs the Walt Disney Company’s approximately 25,000 acre parcel, to be effective on June 1, 2023, according to the bill DeSantis signed last month during a less-than-one-week special session. In addition to DeSantis, the lawsuit names Florida Secretary of State Laurel Lee and Florida Department of Revenue Director Jim Zingale as defendants.

For a fuller explanation of RCID and its functions, I’d encourage you to read the deep-dive analysis I wrote here at Mediaite last month. Basically, RCID is one of the oldest special taxing districts in the state and has broad powers, but it is not unique. Florida currently has over 1,800 such districts, encompassing areas like the launch pads and facilities at Cape Canaveral, various airports around the state, and The Villages, the heavily-Republican retirement community north of Orlando. Through RCID, Disney has been paying roughly $150 million in additional taxes that cover everything from water and sewage treatment, trash and recycling, landscaping, road construction and maintenance, fire department and EMS services, and so on.

Florida law prohibits counties from taxing taxpayers at different rates unless a “special taxing district” is created in which the affected taxpayers consent to a higher millage rate for the purposes of that district. At the time Disney bought its Florida property in the 1960s, the parcel was rural pastures and swamps, miles from existing power lines and other utilities. Disney pays property taxes to Orange and Osceola Counties, and then pays an additional tax levied by RCID, currently set at the highest millage rate in the entire state.

Disney is willing to have RCID levy these additional taxes on itself because they want these services to be provided at a higher level than the counties would otherwise be able to manage. RCID employees have better pay and benefits than their government counterparts. Maintenance services are also performed more frequently and to a higher standard. I live in unincorporated Orange County and there is a pothole the size of a hubcap at the end of my street; no one has ever seen a pothole in an RCID-maintained road.

As I’ve previously reported, neither Disney nor the local governments of Orange and Osceola County want RCID to be eliminated, and no one from DeSantis’ office or the bill’s Republican sponsors in the legislature seemed to have done even the bare minimum of due diligence before rushing through the repeal, such as calling anyone at Disney, RCID, or either county, or actually researching the legal and tax issues invoked by repealing RCID, several of which are invoked in this lawsuit.

Chief among those legal issues are Disney’s First Amendment rights. RCID was targeted for elimination after Disney’s CEO criticized HB 1557, the Parental Rights in Education bill (dubbed “Don’t Say Gay” by its critics) after it had already passed. Florida Republicans were not shy about voicing their intention to retaliate against Disney, leading many attorneys and legal scholars to assess this as a clear-cut case of viewpoint discrimination and a violation of Disney’s right to free speech, as confirmed by the Citizens United Supreme Court case.

Another giant obstacle blocking DeSantis’ attempt to smack down Mickey Mouse is RCID’s municipal bond debt. Like many local governments around the country, RCID finances its ongoing development and infrastructure through bonds. It currently has over $1 billion in outstanding bond debt and if RCID is repealed, that bond debt then becomes the obligation of the taxpayers of Orange and Osceola County. Orange County Tax Collector Scott Randolph (D) estimated this would raise taxes in this county between $2,200 and $2,800 per family of four.

This tax increase is the heart of plaintiffs’ complaint, which cites the expected “increased taxes for the residents of the Orlando area, as well as those that live throughout the State of Florida,” specifically quoting Randolph’s comments, plus the threatened loss of “thousands of jobs.”

The complaint also references the original 1967 statute that created RCID, which contained a pledge from the State of Florida to RCID’s bondholders essentially promising not to “limit or alter the rights” of RCID to perform its functions and “levy and collect the taxes” authorized by the statute, “until all such bonds together with interest thereon, and all costs and expenses in connection with any action or proceeding by or on behalf of such holders, are fully met and discharged.”

Needless to say, the bill DeSantis signed that completely eliminates RCID most certainly can be viewed as an action that would “limit or alter” the district’s rights.

Two additional arguments are made alleging that the plaintiffs’ due process rights under the Fourteenth Amendment to the U.S. Constitution and under Florida Statutes Section 213.015, the Florida Taxpayer’s Bill of Rights, were violated. That state law “guarantee[s] that the rights, privacy and property of Florida taxpayers are adequately safeguarded and protected during tax assessment, collection, and enforcement processes,” the complaint stated, and repealing RCID will “unquestionably infringe” upon their rights to a “fair and consistent application of the tax laws of the state.”

The complaint seeks to have the bill repealing RCID declared unlawful and injunctive relief barring DeSantis and the other state Defendants from enforcing the bill.

As mentioned above, this is only the first of multiple lawsuits expected to be filed challenging the bill. Disney and RCID (it is a separate legal entity) have a long list of strong legal arguments to use to challenge the repeal of RCID, and only need to prevail on one in order to strike down the new law.

In addition to the well-established First Amendment issues and the state’s pledge to bondholders, another provision in Florida Statutes Section 189.072 prohibits the dissolution of an independent special district like RCID unless it is inactive or the majority of the voting landowners consent. Within RCID, the “voting landowners” are the Walt Disney Company and a short list of specially-selected senior Disney employees, so there will not be such consent. There are some additional statutory arguments that Disney and RCID could use that are legally a little more in the weeds, centering around the failure to provide the required 30-day notice for a special act affecting RCID, the charade of adding in a handful of additional special districts into the repeal bill to artificially characterize it as a general act and not a special act, and other provisions of the state constitution and statutes.

RCID’s bondholders, which are mostly institutional banks, also have a separate cause of action against the State of Florida for the violation of the 1967 statute’s pledge to bondholders. Even before the repeal goes into effect, the bondholders’ interest has already been damaged by the bill DeSantis signed because it compromised the security of those bonds. RCID, as stated above, can levy taxes within its boundaries at a higher millage rate than Orange or Osceola County, and transferring that debt to be the counties’ responsibility means that repayment would rely on their already-strapped budgets, lower millage rate, and lack of flexibility.

On Apr. 22, New York-based Fitch Ratings issued a notice putting RCID’s bond rating on a “negative watch,” signaling a potential ratings downgrade. They followed that with another alert on Apr. 28, warning that if the repeal of RCID was not resolved, it could weaken the financial rating of other government entities within Florida.

Fitch emphasized the “unique and dynamic level of discord” the repeal bill was causing between the state government and Disney/RCID and the affected counties, noting that reliability of bonds issued by a government entity is heavily affected by that specific government’s “respect for property rights and bondholder security.” The alert voiced an expectation that the state would “work with various stakeholders to resolve the uncertainty,” but if if this was not done so swiftly, it “could alter our view of Florida’s commitment to preserve bondholder rights and weaken our view of the operating environment for Florida governments.”

Orange and Osceola County governments, along with additional area taxpayers, may end up suing the state. Both counties are facing hundreds of thousands, if not millions, of dollars in legal fees they will incur to study RCID and attempt to negotiate a new arrangement with Disney.

The counties have due diligence requirements that will mandate detailed and expensive studies before any agreement could be proposed, and it’s an even more complicated legal problem because the 1967 statute cannot simply be copy-and-pasted at the county level. Again, this is a bit in the weeds, but county-level powers like creating Community Development Districts (CDDs) and Municipal Service Taxing Units (MSTUs) cannot perfectly mimic the state-created entities; they have different powers and run into problems when incorporated cities are involved (RCID has two, Bay Lake and Lake Buena Vista, and the majority of valuable Disney development lies within their borders).

There’s also the problem of RCID employees’ pay and benefits, unaffordable and legally impossible for the counties to match, as I reported last month. Add in the bond debt, and it’s clear why Orange County Mayor Jerry Demings (D) said attempting to assume RCID’s functions would be a “catastrophic” burden on county taxpayers.

DeSantis, both directly and through his spokesperson Christina Pushaw, has made pledges in recent days that Disney “will pay its fair share of taxes” and Orange and Osceola Counties “will not be on the hook” for additional tax burdens, promising he has a plan to solve all these problems, but so far, no details have been released. Pushaw has repeatedly attempted to dismiss criticism of the repeal of RCID as “another partisan political lie being amplified by the media.”

This lawsuit, however, is not a “partisan political lie,” but a legal reality to which the state will now have to spend legal fees in response, and it is likely only the first of many to come.

Read the full complaint below: