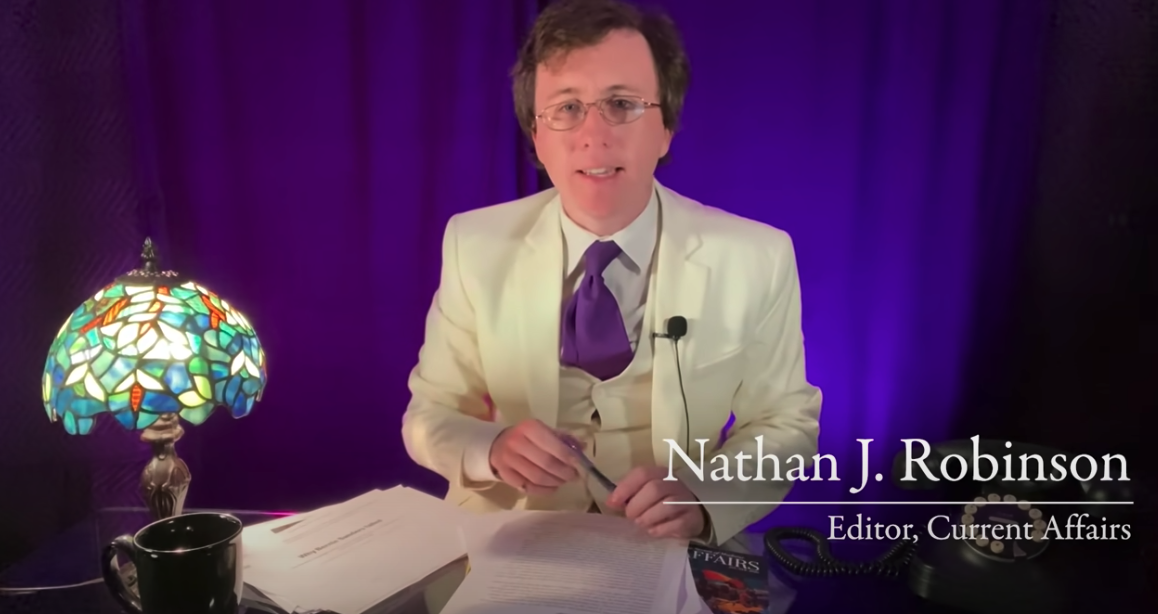 Nathan J. Robinson, a former columnist for The Guardian, said that he was fired for criticizing U.S. military aid to Israel in a new piece arguing “the media cracks down on critics of Israel.”

In a post Wednesday for Current Affairs, the progressive online magazine he founded, Robinson says he lost his job after tweeting what he said was a joke about U.S. military aid to Israel in December 2020, shortly after Congress approved a Covid relief bill and, separately, $500 million in military aid to Israel, pursuant to a 2016 agreement between the U.S. and Israel.

“I am — to my constant shame — moderately active on Twitter, so I relieved my anger with a joke tweet,” Robinson says, providing screenshots of the tweets, which have since been deleted.

“Of course, tweet 1 was sarcasm (which is common on Twitter), but to absolutely make sure that nobody thought this was some kind of actual law, I appended a second tweet to make it crystal clear that I was joking, this was 100 percent a joke, let there be no room for misinterpretation about this joke [emphasis in original],” Robinson writes in his Current Affairs post.

Robinson says he wasn’t immediately aware of backlash to the tweet, which included some calling him an anti-Semite, an allegation he immediately dismissed.

Things changed, however, when the editor-in-chief of The Guardian, John Mulholland, reached out to Robinson in an email, expressing concern about Robinson’s tweet.

“As you partly present yourself as a Guardian columnist allow me to express my concern when you make an assertion as this,” Mulholland wrote, linking to the tweet. “No such law exists. In which case this is, as one might say, fake news, irrespective of the later tweet when you say that it is ‘indistinguishable from law.’ It is not law. End of.”

“Given the reckless talk over the last year – and beyond – of how mythical ‘Jewish groups/alliances’ yield power over all forms of US public life I am not clear how this is helpful to public discourse. And I am not sure why singling out financial aid to Israel in a tweet and devoid of any context – and without mention of aid to other countries either currently or historically – is a useful addition to the public discourse.”

“You are free, of course, to use Twitter in whatever way you choose but it dismays me that someone who presents themselves as a Guardian columnist would make such a clearly erroneous statement without, as I note, any context/justification.”

Robinson apologized to Mulholland via email, adding that he had deleted the tweet and clarified.

Shortly thereafter, Mulholland thanked Robinson for his reply, and for deleting the tweet, adding: “I greatly appreciate your thoughtful response.”

Robinson said that based on his exchange with Mulholland, he felt that the issue had been addressed, and he expected to move forward with his column.

“I took it to mean that as long as I kept my mouth shut about Israel on Twitter, the Guardian would keep publishing my columns on other subjects,” he wrote in his Current Affairs post. However, in the weeks following the exchange, Robinson says his editor became “non-responsive” to his pitches; he was initially told that “the thing with Mulholland had made it impossible” for The Guardian to publish his columns, and he was told the day after that that The Guardian had decided to discontinue his column entirely.

“I asked if it was possible for me to talk with Mulholland and work something out,” Robinson writes. “My editor said it was not, and that Mulholland had indicated the paper would not work with me in the future either, meaning that I should not even bother to send occasional freelance pitches … It was made very, very clear to me: your tweet about Israel annoyed the editor in chief. Now you are fired. Do not come back.”

“Mulholland’s assurance that Guardian writers are ‘free’ to speak their minds was clearly false,” Robinson says. “You’re free, but if you go after Israel, your pitches go in the wastebasket.”

In response to Robinson’s claims, The Guardian denied that he was “fired,” said it regularly reviews its lineup of columnists, and indicated a willingness to work with Robinson in the future.

“Nathan Robinson has written regularly for Guardian US but was neither a staff employee nor on contract. It is not true therefore that he was ‘fired,'” a Guardian spokesperson told Mediaite. “As we enter a new political era, we believe it’s important to publish diverse and original voices in our opinion pages. We continually review the range of regular columnists we publish and we would welcome further contributions from him in the future.”

“The Guardian supports its columnists to express a variety of perspectives on all topics, which are published on the site every day,” the spokesperson added. “Mr Robinson recognized that the tweets in question were ill-considered and it was his decision alone to delete them.”

Some are skeptical of Robinson’s version of events, noting that The Guardian has published multiple pieces that are critical of Israeli policy and U.S.-Israel relations, including a recent editorial that examines whether comparing Israeli policy to apartheid is “prophecy or description[.]”