Trump and First Lady Smiling With Baby Orphaned in El Paso Massacre Draws Criticism: ‘Act Like a Human Being’ 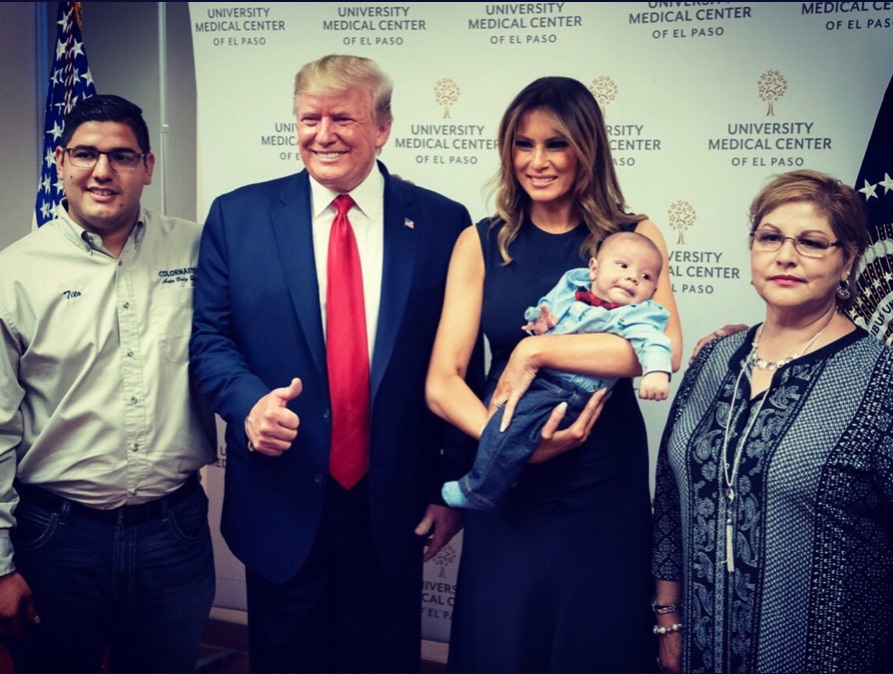 One day after President Donald Trump and First Lady Melania Trump visited with victims of the mass shooting in El Paso, Texas, Twitter erupted in disgust at an image Tweeted out by the @FLOTUS account that showed the pair broadly grinning — and with Trump inexplicably flashing a thumbs-up — while holding a two-month-old baby who lost both parents in the massacre.

Trump has already endured an onslaught of criticism for making political attacks amidst his consolation visits, bragging about his past rally sizes in El Paso to hospital staff, as well as creating a glowing, campaign-style video from footage taken during his visit.

But the image of both Trumps flashing big smiles while holding an orphan of mass gun violence at the hospital where his parents had only recently just died — and where he was returned to just for the photo op — struck a huge nerve with folks online, and their visceral responses showed it.

A hospital official tells CNN Trump showed “an absence of empathy” during his visit to El Paso. Also, Trump and FLOTUS both met baby who was shielded by parents who died in the shooting. The baby was brought back to the hospital to see the president. More on @CNNSitRoom tonight.

I interviewed the kid’s grandfather this afternoon and he confirmed that the White House sent two people to his home to ask him to be present during the visit. No one arranged for the photo beforehand but FLOTUS decided to hold the baby, who has a broken hand…

This child just lost both parents to a white supremacist who drove 10 hours to a Wal Mart to kill Hispanics because, like Trump, he was concerned about an immigrant invasion.

Why, exactly, are the President and First Lady smiling? Why the hell is he doing the thumbs up sign? pic.twitter.com/BzSTljzGB4

Why can’t he just act like a human being for once? pic.twitter.com/zUOHGo2X9D

There will be tons of ‘think pieces’ written this weekend about if you should or should not cancel Equinox and SoulCycle and probably almost nothing writtten about Melania Trump using an orphaned child in a photo-op.

Commander Trump and his wife Melania showed off the baby with pride, as their Handmaid, Ofdonald, lurked in the kitchen with the Marthas, plotting the revolution in Gilead.

This is a photo of Trump grinning while Melania holds a baby orphaned by the shooting. A baby who was taken from home and forced to serve as a prop at a photo-op for the very monster whose hate killed her/his parents.

I would need 280,000 characters to say how furious I am. pic.twitter.com/4umSc9BQHu

It doesn’t make what Trump did one bit less despicable if the grandparents of the baby with no parents are Trump supporters. What they are, are victims. They’re traumatized. They’re grief-stricken.They were exploited. I don’t care whose idea the photo was.

This baby’s parents were just murdered by a psychopath who was incited by Trump’s xenophobia.

I’m not sure I’ve even been as angry as I am right now. This photo op is disgusting. And Melania can f ck all the way off. pic.twitter.com/RUgsP6Z6op

I am genuinely confused and horrified by this image. Am I taking this the wrong way?

Why is Trump and Melania posing, GRINNING, and giving a thumbs up with the infant who’s parents were murdered by the shooter in El Paso.

Seriously… WTH is going on? pic.twitter.com/0YA2hIQeP3

posing with an orphan he made https://t.co/TyYmd3HEZy

AIDE: The baby’s parents were murdered in the El Paso shooting.

AIDE: This has to be a solemn photo.

AIDE: No smiling and NO THUM—

TRUMP: Would you relax? I get it.

I am shuddering out of outrage and disturbed to my core. Donald and Melania Trump took a photo op with a baby whose parents were murdered in ElPaso. Forget impeachment. The two should be behind bars for life