WH Press Buries Sarah Sanders on Her Way Out Over Briefing Drought: ‘Help Wanted: Once a Year, Maybe Less’ 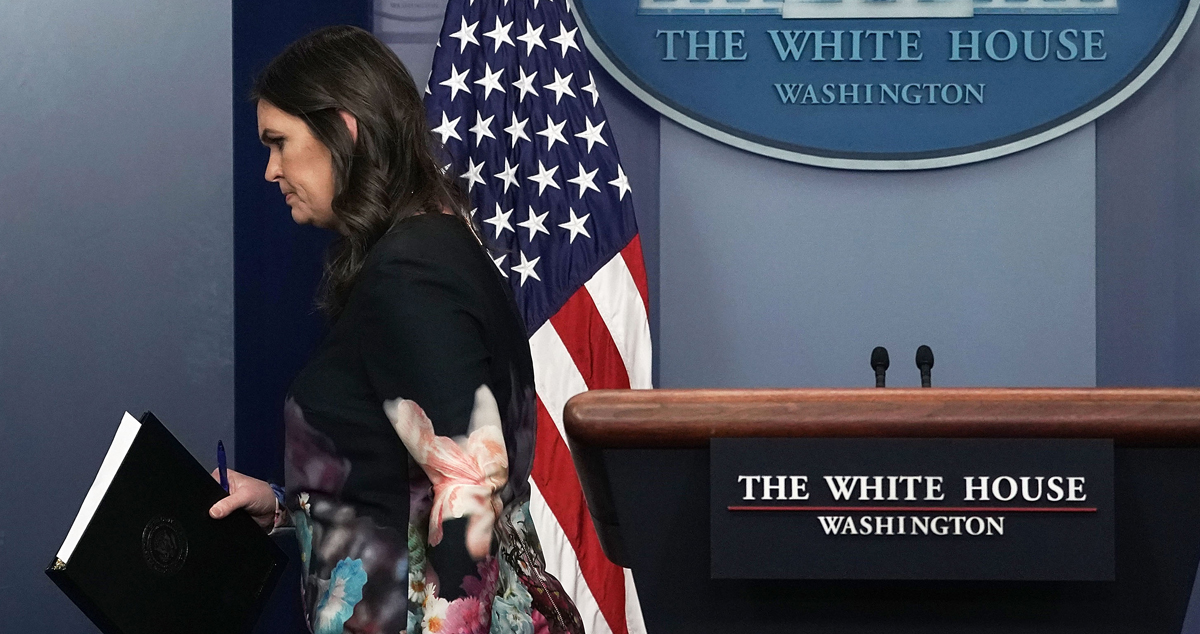 When the news broke that White House Press Secretary Sarah Sanders is leaving her post, naturally all of the media had immediate reactions, whether live on the air or, like many White House reporters, on Twitter.

And in particular among those White House reporters, the issue of the lack of briefings held by Sanders in the last year, and the decline in briefings in general over the course of the administration came up. A lot.

HELP WANTED: Need someone to run daily news briefings in important Washington, D.C. building with incredible consequences for the country. News briefings held once a year, maybe less. Must be comfortable lying on camera. https://t.co/EW4PGf7Mz4

But the jabs at Sanders and the White House over the lack of briefings was nearly universal, whether delivered matter-of-factly or with a snarky edge.

Sanders last formal WH briefing was 94 days ago on March 11. Doesn’t count the brief “gaggles” she occasionally conducts in the WH driveway, usually after doing liveshots on @FoxNews. pic.twitter.com/ixD1P9Iir8

She hasn’t done a briefing in about three months. https://t.co/3ms3JfB7pO

POTUS announces Sarah Sanders is leaving. It’s been 94 days since there was a briefing. https://t.co/ugtPp2wFId

The most recent White House press briefing was on March 11, 94 days ago.

It has been 94 days since @PressSec last held a “daily” White House press briefing. https://t.co/aB91TgdtSO

It has been 94 days since the last White House press briefing https://t.co/FC8Ks98kH0 via @politico

This one stood out for its understated burn.

Farewell @PressSec. We have missed your presence in the briefing room. https://t.co/DrajzQueH1

There were also the “why bother to have a press secretary” tweets.

Open question: will Trump even name a new White House press secretary? The position is…diminished, to say the least.

Is Sarah Sanders going to be replaced? What would be the point? https://t.co/VN1DNiDD1T

A few folks tried to put the departure into a big picture of turnover at the White House.

Since I reported this story on White House survivors in December, there have been two more departures (with @PressSec‘s announced departure and Johnny DeStefano leaving). There are very few original aides left, which is unusual just 2 1/2 years in. https://t.co/KIw3zEygsH

Breaking: another one bites the dust. @realDonaldTrump https://t.co/3HJ7jo72BU

So those left from Season One include:
Stephen Miller
Dan Scavino
Kellyanne Conway
(who am I forgetting? anyone? anyone?) https://t.co/j43qy3ckws

But it doesn’t really apply, since as other members of press pointed out, Sanders was there for quite a long time.

Sarah will have spent just under two years in the @PressSec role, less time than any of the Obama administration’s three press secretaries.

The record is held by James Hagerty, who held the role for all eight years of the Eisenhower administration. https://t.co/Mdu4AdeiML

Sarah Sanders has been with the Trump White House from Day 1. She began as Principal Deputy Press Secretary under @seanspicer. On his departure, she was named @PressSec on July 21, 2017, date of photo. pic.twitter.com/kRUlnZ4Ac7

There were, of course, alternate takes on several points. What Breitbart’s Charlie Spiering recalled as a favorite anecdote:

Among my favorite @PressSec memories is this press briefing with her three kids on take your child to work day – pic.twitter.com/DGN5FH2g3K

…was recalled by ABC’s Karen Travers for its marking of the long time without a briefing.

It will be something if Sarah Sanders last appearance at the WH podium was the “Kids briefing” she did here on April 25 for Take our Kids to Work Day… https://t.co/MTG4N0jICv

It was Jonathan Swan of Axios, though, who seemed to hit the gist of all the press corps reactions when he summarized Sanders’ tenure as not really being about the job she had at all.

By the end she wasn’t really a press secretary. She was a top adviser who Trump consulted on just about everything. https://t.co/b0tE8zEPbz

Although, again, not everyone considered that a criticism, regardless of the frequency of briefings.

The issue of briefings came up in person when Sanders spoke with reporters about her departure.

Asked by @HallieJackson if she regrets not holding more press briefings, Sanders says “no, I don’t.”

Still, it wasn’t all ill will. This amusing moment is a good way to end the round-up:

I asked Sarah if she had any regrets and she said, “Yeah. Calling on you in the briefings” – I may have laughed the loudest. @realDonaldTrump @PressSec pic.twitter.com/ijO9bJtGFA