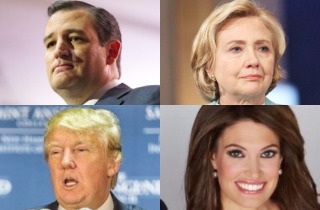 It’s that day of the year again! A tradition like no other when your (again) overserved Mediaite columnist attempts to hammer out a can’t-miss-prediction column in between meaningless Bowl games, the Winter Classic, and the 247th viewing of Frozen in the Concha household version of New Year’s Day.

Last year’s column had mixed results. Got a few things right: Naming the Super Bowl and NBA champs (Pats and Warriors), Stephen Colbert’s downward trend to third after initial hype in the late night ratings race, the successful re-election of Bibi Netanyahu, and the president’s approval jumping over 50 percent at some point despite lame duck status, which it did in October before dropping considerably following his “petulant” response to the Paris attacks. In other words beyond “petulant” applied by the liberal Richard Cohen of the Washington Post at the time: “If the Obama of today and not Winston Churchill had led Britain in World War II, the Old Vic Theatre Company would now be doing “Hamlet” in German.” The president clocked in at 43 percent approval before going on vacation.

Also got more than a few things wrong, including: John Kasich being in the driver’s seat for the Republican nomination (a pre-Trump-entry prediction, of course), American Sniper winning Best Picture (the equally-deserving Birdman took the trophy), Sherrod Small being named Red Eye‘s new permanent Friday host (Greg Gutfeld ended up stepping down altogether to concentrate on his own Sunday night show, and the replacement nod went to Tom Shillue instead), and a horrible prediction around the iWatch being next big thing in technology.

So this isn’t a perfect science, not even close. Try going even 5-for-5 on the predictions front, let alone 15-for-15. If it were that easy, we’d all be living in Vegas right now acting like Biff in Back to the Future 2. Regardless, it makes for fun writing and hopefully somewhat compelling reading… so here you go:

– Ted Cruz wins in Iowa, South Carolina, and the SEC primary to propel the Texas Senator to the GOP nomination.

– After finally bowing out of the race for the Republican nomination following key loses in the Deep South, Donald Trump signs with CNN and gets a primetime program (where the ratings will be, you know, the “H” word).

– The Cleveland Cavaliers defeat the Golden State Warriors in 7 to win first championship for the city in any sport in 52 years.

– The New York Mets top the Houston Astros in 6 to win its first championship in 30 years.

– HBO’s Girls is mercifully taken off the air upon completion of upcoming season as dozens mourn.

– Unfortunately (and obviously hoping against hope on this one) domestic terror events rise as ISIS-inspired lone wolves copycat San Bernardino to make a statement in an American election year. On cue, some on the left openly root for active shooter (while events are unfolding) to be a crazy right-wing white guy, while righty Twitter hopes shooter has a foreign — preferably Muslim-sounding — last name … showing how pathetic we’ve become as a society when attempting to advance a narrative.

– At least 21 members of the cable news family (hosts, reporters, contributors) tweet out something utterly stupid/ill-advised/out-of-bounds that forces an apology and/or suspension, because people simply do not learn from the mistakes of others in this business.

Can’t miss, right? All absolute layups. Take it to the bank.

What are your predictions for 2016? Share them in the comments section where they will live forever below.