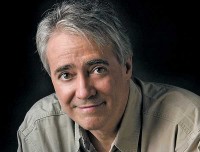 A whole lot of people wake up on Saturday mornings with Scott Simon (I am no exception). Simon is the long-time host of NPR’sWeekend Edition Saturday, and the fact that he boasts 800,000-plus twitter followers is a small measure of the program’s reach. Simon joined NPR in 1977, and when not broadcasting the show out of D.C., he is based in Chicago where he lives with his wife and two daughters — if you haven’t listened to his essay about adopting his second daughter from China, you should. Simon is a devoted Chicago White Sox fan, an avid Twitterer, a wearer of colorful socks, and a strong believer in sending thank-you notes. It also should be noted that he responded to our request in under an hour (!). His answers are below in the latest installment of 5QQ – Five Quick Questions.

WSJ — and their whole Saturday edition is outstanding. Their news coverage remains tough, shrewd, and fair, the line between reporting and editorial stays firm and bright, and their sports and arts coverage is beginning to go past the Times, too. Well, there goes my chance of ever getting a good review in the New York Times.

Cluck, the younger brother of whom Tom and Ray never speak, but is chained to a radiator in their garage. Someone should call the authorities.

Alas, got to say Kindle since I got one for my birthday in March.

3. What’s the biggest story the media has missed this year (or last week)?

Immigration (legal) and migration of Asian, African, and Latin American families into small towns in America, which will transform the country in all ways. Diversity is no longer just in big cities, but so-called Anytown, USA.

Both, of course. Excited about so many new ways to learn about the world, nervous that they will be used in the worst ways, too. But — as a Chicagoan — I try never to forget that what we think of as the glory days of journalism (“Hey, baby, get me rewrite!”) were also filled with fraud, hysteria, and blockheaded-ness and worse.