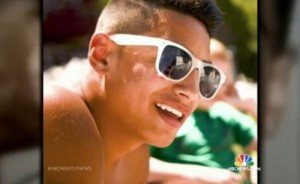 A 911 dispatcher with the Albuquerque Fire Department has been placed on administrative leave following the death of 17-year-old Jaydon Chavez-Silver.

Matthew Sanchez, the dispatcher in question, hung up when Chavez-Silver’s friend, who was trying to keep the teenager alive following a drive-by shooting at a party, lashed out due to to the extreme nature of the situation. Sanchez inexplicably told the caller to “deal with it yourself” and hung up.

Here’s a partial transcript of the 911 call from KOB 4:

Sanchez:  Is he not breathing?

Sanchez: Is he breathing?

Caller: He’s barely breathing. How many times do I have to f*cking tell you?

Sanchez: Ok, do you what ma’am? You can deal with yourself. I’m not going to deal with this, ok.

Caller: No, he’s going to die.

The call ends there.

While emergency crews had already been sent to the location, Sanchez’s abrupt disconnection meant that Chavez-Silver’s friends were left without assistance until help arrived. The teenager was later pronounced dead at the local hospital.

Following the incident, the AFD released a statement to the local Albuquerque media:

“After learning of the alleged misconduct, Driver Matthew Sanchez was immediately removed from the dispatch center and placed on administrative assignment. An internal investigation has been initiated. As the Chief of the department, I am taking the allegation very seriously,” said AFD Chief David Downey.

Check out the audio clip from the 911 call, courtesy of Sebastian Murdock: