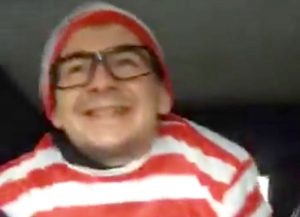 Jockeys, by their nature, live life on the run. One former Thoroughbred rider in England kept on living that way even after hanging up his tack — leading police on a wild chase as he posted pictures and even a video taunting them.

According to Racing Post, 30-year-old JJ McMenamin had been on the run from police ever since missing a court date last month for driving offenses. The offenses are not specified, but it was probably more serious than a garden variety speeding ticket — as, according to reports, police brought out search dogs and even a helicopter in an effort to find the ex-jockey.

All the while, McMenamin taunted authorities by posting pictures of himself to Facebook dressed in a Where’s Waldo (or, as he’s known in the UK, Where’s Wally) costume.

The jockey decided to give up running on Monday, and headed to the local police station to turn himself in — but not before appearing in one last Facebook Live video from the road.

McMenamin continued to taunt police, as he looked far from despondent on his ride to the station.

“I’ll keep my head up,” McMenamin said. “Always smiling. Entertaining the nation on a daily basis.”

UPDATE 6:04 p.m. ET — It turns out the charges, in fact, didn’t amount to much more than a speeding ticket. According to a report in The Gazette, McMenamin was charged with “driving while disqualified” and driving without insurance. He was fined a total of £235, and is forbidden from driving for three months.