A Libertarian Insurgency in the Press

A Libertarian Insurgency in the Press 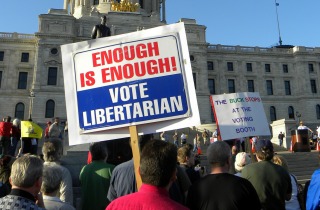 Even President Barack Obama’s administration has acknowledged that “private sector velocity” is much closer to optimal swiftness of action than anything the public sector can achieve. If only the political class could match the private sector’s ability to respond promptly to observable trends. Politicians and political organizations often exhibit the worst elements of both divisions of society, featuring the public sector’s lethargy with the private sector’s elitism and lack of inclusiveness.

As such, political organizations are slow to respond to developments and often find themselves flailing gracelessly in the effort to accommodate trends that actors in the more responsive private sector are quick to embrace. One recent and unavoidable trend is the speed with which libertarianism is catching on. Polling has indicated that voters, particularly the youngest American voters, are adopting a libertarian philosophy which rejects the paternalism displayed by members of both parties and instead places its faith in the ability of the individual to best manage their affairs.

Writing in The Federalist on Tuesday, David Harsanyi parses trends in recent polling data which suggest a libertarian shift in the electorate. This is a shift, he notes, which has been mistaken by both Democratic and Republican partisans as an indication that younger voters are embracing their respective philosophies in droves. In fact, as Harsanyi adds, it is more likely a broad rejection of both political parties as they are currently constituted.

RELATED: The Volokh Conspiracy Announces Move to the Washington Post, Will Be Paywalled

Politicians and political movements are, as ever, slow to adapt to this growingly apparent trend. Private sector media companies, however, are not so sluggish. Recent moves by powerful media companies like The Washington Post and Fox Business Network indicate that the private sector is moving with characteristic alacrity to embrace this trend and create a loyal base of libertarian-leaning media consumers.

The foremost libertarian opinion magazine, Reason, and has recently sent some of its prominent writers and personalities to FBN to host The Independents. That program bolsters Fox’s effort to court liberty-loving media viewers, a campaign they began after hiring libertarian reporter John Stossel to host his own FBN program and promote his unique political point-of-view across Fox’s platform. Even stauncher libertarian Judge Andrew Napolitano also had an FBN show (Freedom Watch) for two years and can now be seen daily giving a libertarian perspective on judicial matters across all Fox platforms.

The Washington Post, as POLITICO confirms, allowed their one-time rock star “wonk,” Ezra Klein, to outbid himself and leave the company in order to start his own blogging venture. Klein’s vertical has been a boon to the Washington Post’s business model. It surely is no coincidence that the Post announced this week that they were filling the void by creating a new legal vertical built around Eugene Volokh’s prominent libertarian-leaning blog, The Volokh Conspiracy.

Volokh promised his loyal readers that the Post “assured us they had no desire to change what we do,” and “they approached us because of who we are and what we write.”

“They know our ideologies,” he continued. “They know our blogging style.” Of course, they do. The Post isn’t purchasing an ideology, they are purchasing loyal readers who will regularly consume political analysis and opinion and pay for that service.

In a fractured media environment with an ever-shrinking universe of potential readers and viewers, media firms are seeking out dedicated audiences that they do not have to expend the energy and capital themselves to build. Among the more loyal audience of political news and opinion consumers are those with a libertarian bent – particularly because they have been so underserved for years. That is changing.

Media firms appear eager to capitalize on the growing trend among voters towards individual liberty. Good for them. The question then becomes, when will the political class catch up?