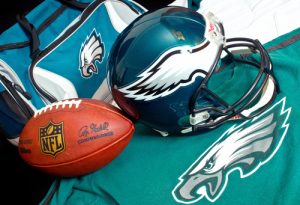 This past offseason, Philadelphia Eagles long snapper Jon Dorenbos gained national recognition for a series of magic tricks he performed on America’s Got Talent this past season. Perhaps he, given his prowess as a magician, could explain how the same Eagles fan manages to win the team’s ticket giveaway almost every week.

The Philly Voice discovered that a Twitter user with the handle @Yungyle has managed to win the Eagles’ #FanFriday giveaway quite a few times over the past few seasons.

Yungyle has won the contest by finding the Eagles’ mascot, Swoop, at a random location announced on the team’s Twitter account, and being the first to give him a high-five.

Congrats to #FanFriday winner @YungYle! We’ll see you at the game on Monday night. pic.twitter.com/ELqpXDeH4b

But does the man have help from the inside? Philly Voice unearthed this Tweet which suggested Yungyle might have an inside edge of some sort.

My #Eagles plug? just told me that me & wifey will be at @LFFStadium this Sunday for the #Eagles game !!

If it is on the level, perhaps Yungyle and Dorenbos ought to do a Vegas act. Until then, the 5-9 Eagles can only hope for some more magic on the field.