According To Venezuela Obama Is Responsible For Haiti Earthquake 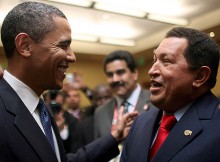 I’m not even sure The Onion could make this stuff up. State-owned radio and television stations in Venezuela (Hugo Chavez state-owned) are apparently reporting that the cause of last week’s devastating earthquake in Haiti was caused by “secret” U.S. “weapon of earthquakes.” This via Reason.com:

Both a Venezuelan state-owned radio and television properties zeroed in on a secret U.S. “weapon of earthquakes” as the cause of the earthquake that struck Haiti last week causing a death toll could exceed 200,000 according to some sources. On the website of Radio Nacional de Venezuela (RNV) are published statements of the university professor, Vladimir Acosta, a regular contributor to the media controlled by the government of Hugo Chávez, accusing the U.S. of wanting to make Haiti a protectorate under the guise of the natural disaster. But to further the conspiracy theory, argued that “we have the worrisome suspicion that this earthquake may be associated with the project called HAARP, a system that can generate violent and unexpected changes in climate.” …

According to the channel Vive, a report from the Russian Northern Fleet “would indicate that the earthquake that devastated Haiti was the ‘clear results’ of a test of the U.S. Navy through one of its ‘weapons of earthquakes'” . As published on this Venezuelan public media site, it is “more than likely” that the U.S. Navy had “full knowledge” of harm that “this earthquake test could potentially have on Haiti and had pre-positioned their Southern Command Officer, Gen. PK Keen, on the island to oversee relief efforts if needed.” [*translated with the help of Google Translation.]