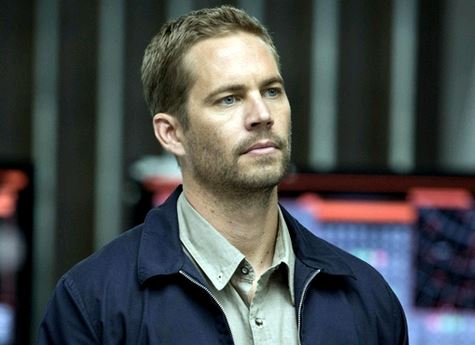 Actor Paul Walker, best known for the Fast and the Furious movie series, died in a “fiery car crash” on Saturday, according to TMZ:

The accident happened in Santa Clarita — north of Los Angeles — and according to multiple sources connected to Paul … the actor was in a Porsche when the driver somehow lost control and slammed into a post or a tree … and then the car burst into flames.

Several of our sources — some who are still at the scene of the accident — tell us Paul and another person in the car were killed. Law enforcement is still on the scene, and we’re told the L.A. County Coroner’s Office is on the way.

So far, TMZ is the only outlet reporting the death, and lists the story as “developing,” and according to TMZ, this is a photograph of the crash scene: 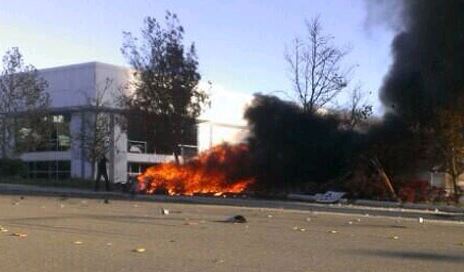 Update: According to TMZ, “A rep for the actor confirms Paul died today in the crash after leaving a charity event.”

Additional photo of the crash scene below, via Twitter: 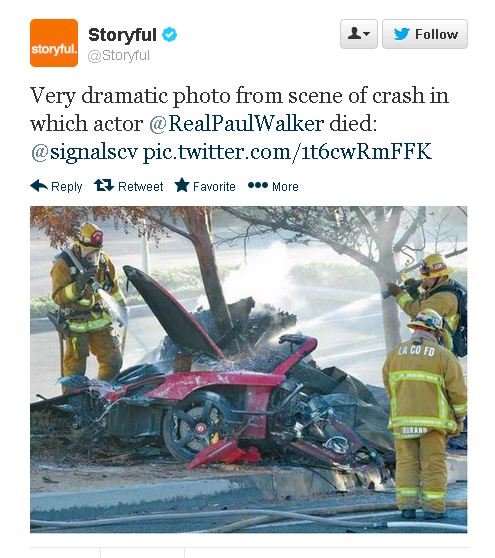 Update: There is a report circulating of a Paul Walker death hoax. That report is a fake.

The late actor’s Twitter feed and Facebook account now confirm that Paul Walker has, in fact, tragically been killed, and was a passenger in the fatal crash:

It’s with a heavy heart that we must confirm Paul Walker passed away today in a tragic car accident…MORE: http://on.fb.me/1bzn8gD – #TeamPW

It is with a truly heavy heart that we must confirm that Paul Walker passed away today in a tragic car accident while attending a charity event for his organization Reach Out Worldwide. He was a passenger in a friend’s car, in which both lost their lives. We appreciate your patience as we too are stunned and saddened beyond belief by this news. Thank you for keeping his family and friends in your prayers during this very difficult time. We will do our best to keep you apprised on where to send condolences. – ‪#‎TeamPW‬