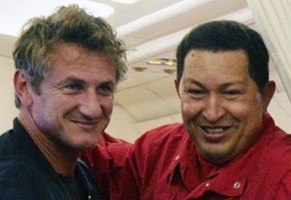 All the usual sources were furious at Sean Penn when he gave a lengthy interview with Bill Maher in support of Venezuelan President Hugo Chavez. Hours ago, however, a fellow celebrity joined the fray when Maria Conchita Alonso, the Cuban-American actress and singer wrote a lengthy open letter debating the Oscar-winner’s claims.

Sean Penn is certainly a provocateur, and much of what he claims publicly is defended as hyperbole. But that doesn’t make his actions and comments any less reprehensible to his critics, particularly Conchita Alonso, who published the following letter taking down his support of Chavez, who many believe to be a ruthless dictator.

The full letter reads as follows:

Even though I have great respect for your artistic talent, I was appalled by a recent television interview where you vigorously showed support for the regime of Hugo Chavez. Therefore, I’ve decided to set the record straight for you regarding the Chavez regime, supporting my case based not only on my political ideologies, but on proven facts you choose to ignore. Otherwise, I believe your position would be different.

Being born in Cuba, a country where freedom of speech is non-existent, it’s startling to observe how Venezuela, where I was happily raised, is fast becoming Cuba’s mirror image: Dismantling of fundamental democratic rights deserved by its people and citizens of the world.

For example, you said that all Chavez-winning elections in Venezuela were “transparent.”

Then WHY didn’t the government allow a manual recount of the votes and computer information when doubt set in? After all, how do you explain how these votes that were strongly favoring the opposition mysteriously reflected the opposite results the morning after, thus permitting Chavez to continue on? On what are you basing your conclusions? I strongly recommend that you read a report by the U.S. State Department written in 2009 entitled “The Fraudulent Elections in Venezuela”.

We live in a Republic comprised of three autonomous branches of government: Supreme Court, Congress and Executive, thus, a true democracy.

Then WHY do you accept violations by part of the government of Venezuela to ignore its Constitution whereby one man, military-educated Chavez, controls all branches of government? His military background is revealed by his philosophy: “I order, you obey and if you disagree you’re a traitor to the country.” And your voice is silenced along with the ability of freethinking. Did you know solely the government controls 92% of media communications?

You’ve strongly criticized your own governments’ overspending and corruption, whereby the budget for We the people never ends up in the hands of those who need it most.

Then WHY do you support a government with over $100 million in oil revenue that has 71% poverty? Or don’t you know that corruption is so rampant that the rightfully deserving poor never sees a “red cent”? In addition, the fact is that Chavez gives away millions of dollars; belonging to the Venezuelan people, to other countries in order to build a false sense of philanthropy of a man whose self-proclaiming ego is blinded by power behind a communist Cuban-style revolution, expanding such regime.

We live in the U.S.A., the land of opportunity to do and say what we desire, respecting dissenting points of view, of course and without reprisals.

Then WHY do you defend a government whose stronghold upon its people is so oppressive that a big price is paid for exercising freedom of speech: Persecutions, closing of radio and television stations, jail…and even death?

You are fortunate enough to live in a country where you can buy property and claim it as your own to do whatever you want with it.

Then WHY do you promote the interests of a government that violates the Constitution by hindering the possibility of development: Land, industries, commerce, communications companies, foreign investment opportunities, financial institutions and private property? This is an everyday scenario in Venezuela.

Then WHY haven’t you informed yourself on these facts by reading Venezuelan and international newspapers exposing thousands of cases?

Given your sense of community and respect for all people, I think you would defend the security of the citizens in your country.

Then WHY do you validate a government that has converted Venezuela into the second most dangerous country in the world, where impunity is above 90% and its people live in a constant state of stress and fear of getting killed? Many wonder if this situation isn’t but a diabolic strategy by the part of the government, something to think about. Do you know that the weekend of March 13th there were 67 counted homicides only in Caracas? Furthermore, in the first 50 days of this year, there have been 140 express kidnappings for fast money (a 50% increase in 2009 versus previous years). After 11 years of the Chavez government, more than 16,000 people has been murdered by armed gangs and we’re not even at war like in the Middle East.

In the U.S.A. the arm of the law comes down hard on government or private sector where cases of fraud and corruption are discovered.

Then WHY do you defend a politician who promised to sweep corruption, but has ended up sponsoring illicit enrichment by part of his closest allies and civil servants, placing Venezuela as the most corrupt country in the Americas and in its political history? Corruption has increased 68% and inflation 31% in 2009. What a coincidence, Sean that the majority of those “corruptors” are members of the government you have chosen to embrace.

You’ve demonstrated admirable assistance to those in need, due to natural disasters or poverty, those with desperate pleas to get their misfortune exposed for the whole world to see.

Then WHY do you applaud the efforts of a government that has notoriously increased poverty (65% to 71%), produced scarcity of staple products and created an energy and water shortage crisis never seen in Venezuela? Not to mention the numbers of children begging in the streets. You may have missed it because the government tends to take the scenic routes for its guests. I invite you see the real Venezuela, stay for a couple of weeks without the logistics the government of said country organizes for you and you’ll be amazed with the results in your unaided observations.

Sean, you live in a country where your parents had the freedom to teach you principles and respect for entities and human beings, where education hasn’t been manipulated by political agendas of those in power.

Then WHY are you in favor of a country where day after day education isn’t plural by obligating a single-minded agenda and lack of respect for family structure? Did you know Sean that in Venezuela there is political indoctrination at a very early age, better known as “brainwashing”? And let me tell you that if parents don’t agree, they will lose custody of their children, just like in Cuba, a country you’ve placed on a pedestal.

You are a product of a Jewish father.

Then WHY is your fascination with a government that has overtly stated its hatred against the Jewish community worldwide, to the extent that the State of Israel condemned anti-Semitic attacks in Venezuela? Do you think it’s fair that many Jewish-Venezuelan families have emigrated because the Chavez government robbed their personal files when their temples and offices were under attacked in 2008?

I don’t think so, Sean, that you would support violence as a means to impose your agenda.

Then WHY do you support a government with close relationships with FARC, ETA, Cuban G-2, Government of Iran, Al-Qaeda and Hezbollah, among others, which are the most feared terrorist movements in the world?

You have said that you applaud the actions that Chavez has instituted for his “pueblo”.

Then WHY do you back him up when he himself has recently publicly recognized his failure for effective social programs (missions) in the areas of education, social service and hospitals; where each day the number of the uncared rises for lack of appropriate facilities and respective upkeep, and a country where the mothers give birth in the streets? This you can see on YouTube in investigative programs run on German, Swedish, Italian and Spanish television stations.

Sean, have you considered researching the existence of the growing list of political prisoners, including journalists, on your own? For your information Chile, Peru and Costa Rica has that data. Furthermore, many of these prisoners are tortured and their families persecuted and threatened, just like the Cuba you stand up for.

Is that what you support when you publicly declare that all those that say that Chavez is a dictator should go to jail?

Sean, you have the right to say what you want, but as far as I know, your statements are contradictory to “Freedom of Speech”, the same one you enjoy in this country; by coincidence, “The First Amendment of the Constitution of the United States of America.”

My intention isn’t to convince you, but to let you know what is truly happening in this beautiful country of noble people, Venezuela. I would encourage you to investigate in depth the “inside story” and realize for yourself the dark side behind the person you choose to idolize.

Agreed, Chavez did win his first elections, but like Hitler, he betrayed what the country gave him: The vote of confidence.”

Conchita Alonso is a Grammy Award winner who has appeared in a number of movies and recently on the TV show Desperate Housewives. She has been a critic of Chávez for a number of years, making multiple appearances on Fox News programs to discuss the subject.