As you might recall, a few months ago The New York Times announced that they would not publish any of Charlie Hebdo‘s cartoons of Muhammad, even after Islamist terrorists massacred the French satire paper’s staff. ““Under Times standards, we do not normally publish images or other material deliberately intended to offend religious sensibilities,” they said in a statement. “After careful consideration, Times editors decided that describing the cartoons in question would give readers sufficient information to understand today’s story.” 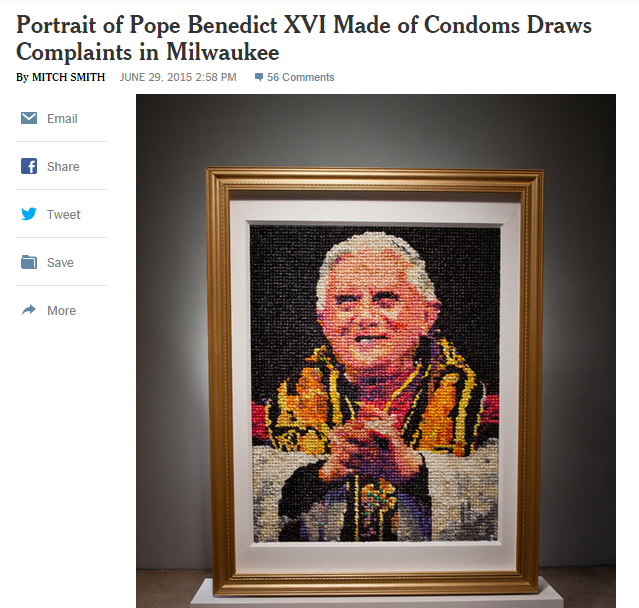 Now for those who somehow missed the culture wars, the Catholic Church has held that the use of condoms is intrinsically evil for over a millennium. It also teaches that Pope Benedict XVI served as the representative of God on earth and had the divinely-given power to speak infallibly on very specific issues. In short, to a devout Catholic, the image the Times published is no less offensive than a drawing of Muhammad would be to a Muslim. Indeed, the entire point of the Times piece is that Catholics were offended by the portrait, now displayed at Milwaukee Art Museum.

As I’ve written in the past, The New York Times‘ brave anti-blasphemy stance is essentially a farce. Despite a blistering op-ed back in May attacking Pamela Geller for “inflicting deliberate anguish” on Muslims, the Times gave glowing reviews to Piss Christ (which they showed), to images of the Virgin Mary made of elephant dung (which they also showed), to The Book of Mormon, to The Death of Klinghoffer, and to basically any provocative anti-religious speech that didn’t target one specific religion.

What I wish we could really get from the Times is honesty. I understand on some level that a newspaper with hundreds of employees– many embedded in the Middle East– doesn’t want to publish images of Muhammad. I personally don’t have any issue publishing the image of Muhammad. Hey look, here’s one now! 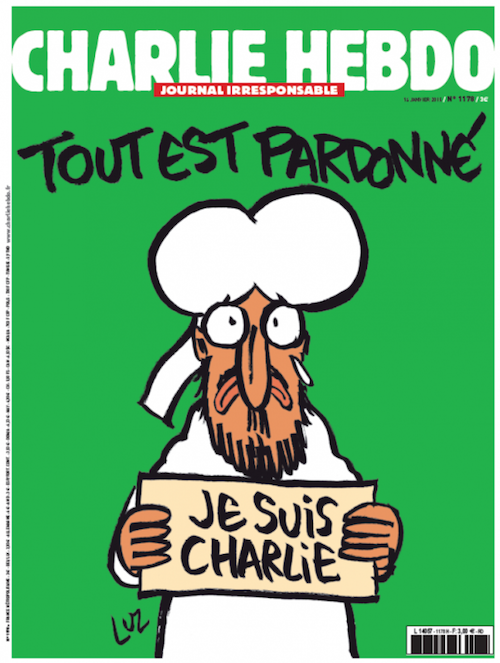 But I’m a nobody. If I had hundreds of people depending on me for their safety… I don’t know what I’d do. Could I really risk the death of other human beings just to make a political statement?

But instead of being forward with their readers, the Times sanctimoniously acted like they were taking the high road. “Oh, we’re not scared of terrorists,” they tutted. “We’re just so above such coarse and rude depictions, not like those other outlets.” But in reality, coarse and rude depictions are perfectly okay at the Times when directed at religions that– lets face it– aren’t all that popular at Manhattan cocktail parties.

The Times need to come clean. The anti-Catholic art display was republished because the Archbishop of Milwaukee’s response was, “Love your enemies, do good to those who might harm you, said Jesus. In the face of ridicule, we’ll continue to do our best to LOVE ONE ANOTHER.” The Charlie Hebdo images of Muhammad were not republished because the response from the offended parties was mass murder.

It’s an intentional double standard. It may be a wise one, or it may be a dangerous one. But the least the Times can do is address it.