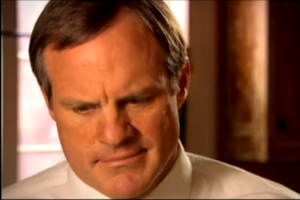 As the nation awaits the 2010 elections, candidates from all walks of life are trying to outdo each other with increasingly absurd “common sense” proposals. This gem, uncovered by the good folks at Wonkette, features Alabama gubernatorial candidate Tim James playing the role of a menacing white-collar figure pacing about a home, consumed by the concern that multiculturalism at the Department of Motor Vehicles will destroy his home state.

It’s best to watch the ad with as little knowledge of what is to come as possible, so here it is:


There is so much to talk about with this ad that it is difficult to pick a starting point, so let’s start with the name of the ad, “Language.” James’ central point is that the government is wasting too much money on translating DMV materials out of English, and that the practice is inherently unpatriotic and disrespectful because “this is Alabama; we speak English.” To be fair, Alabama actually does have a constitutional amendment declaring English the official language (as of 1990), so his point is slightly validated by that.

But then there’s the issue of the DMV tests that he wants to keep English-only themselves. There are many, much more relevant government bureaucratic documents that are commonly translated out of English into other languages: tax forms, census forms (though chances are he doesn’t like those either), some schools’ standardized tests, and citizenship tests, to name a few. It seems completely arbitrary to pick on the DMV over any other state institution.

And, as already pointed out, the actual filmmaking here is questionable. The lighting and overall tone is distressing, and James makes an unexpected pause towards the end to let the depth of his point sink in without really making a poignant point. The ending is simply unsatisfying– though, admittedly, that’s precisely why it’s impossible to stop watching it.