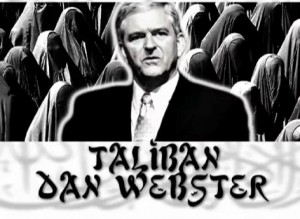 Congressman with Guts® Alan Grayson has upped the ante on campaign ads, even by his own aggressive standards, with a new ad that dubs his Republican opponent for congress “Taliban Dan Webster.” While the ad focuses on Webster’s moral attitudes from the 1990s, the ad is an unmistakable echo of an infamous 2002 attack ad by Republican Saxby Chambliss that pictured triple-amputee Vietnam vet Max Cleland with images of Osama bin Laden and Saddam Hussein.

This new ad closely follows another Grayson ad that hews to the Bush-era GOP formula, one which FactCheck.org says falsely accuses Webster of being a “draft dodger.” Is turnabout fair play, or is Grayson’s line-crossing a short-sighted play to his base?

The Grayson campaign rejects comparisons to the Saxby Chambliss ad, telling Mediaite (via a spokesperson), “Our mention of the Taliban in the ad is about the way it governs, not about its military. The Taliban is an extremist government regime that forced its crazy right-wing views on the populace it governs. If elected, Dan Webster would force his extreme crazy right-wing views on Central Florida.”

In other words, they’re not calling Webster a terrorist, just a religious fanatic.

When we pointed out that the “Taliban Dan” ad only featured citations from the 1990s, Grayson’s campaign responded that “Webster has been asked by local media to deny the assertions in the ad, and he has not denied a single one… He does not deny any of the assertions that this stuff is still on his agenda.”

At this time, Webster’s campaign has not yet responded to our request for comment, but will release a statement shortly.

We also asked about the “Draft Dodger” ad, which FactCheck.org said “falsely impugned” the patriotism of Grayson’s opponent. Grayson’s spokesman responded, “During Vietnam and the draft, there was a national call to serve for every eligible recruit. What FactCheck didn’t understand is that, because of the national call to serve at that time, every deferment Webster received before his ultimate classification is a refusal of that call to serve.”

While Grayson’s bare-knuckled style has certainly not endeared him to opponents, he has earned the loyalty (and campaign dollars) of many Democrats who bitterly remember the 2004 results of “taking the high road,” and are eager to fight fire with fire. Grayson first hit the national radar last year with a series of blistering rants about health care, and since then has become the gold standard for Democratic rabble-rousing.

Grayson hasn’t confined his ire to Republicans, either. He recently called for the firing of Press secretary Robert Gibbs in the wake of comments Gibbs made about the “professional left.”

While Grayson may run the risk of alienating independents and centrists by embracing such tactics, the payoff has been a tough-to-argue-with record of fundraising success and a sizable early lead against Webster.

ORLANDO, FL – This weekend Alan Grayson released his third negative television advertisement against Daniel Webster.  So far, Grayson’s negative ads have outnumbered his positive ads (3-2).  It is clear that Mr. Grayson would rather talk about issues from twenty years ago than the issues of the past two years.  First Grayson mislead voters about a stairway, then he misleads them regarding Mr. Webster’s inability to serve in our military, and now Grayson compares Webster to the Taliban.

“Alan Grayson’s latest attack on my husband is shameful.  Mr. Grayson seems to have a problem telling the truth and no problem misleading the public,” said Sandy Webster, who has been married to Daniel for thirty-eight years.  “Dan has been an amazing husband and father, and the finest man I have ever known. Mr. Grayson should be ashamed of his nasty smears against my husband.”

Alan Grayson compares Webster to the Taliban, but the odd thing is that Grayson doesn’t even support our troops efforts in the Middle East to combat the Taliban or other Muslim extremist groups.

“Alan Grayson is at it again, misleading voters with nasty negative ads against Senator Webster.  Mr. Grayson is certainly no champion of respecting women, he even publicly called a woman a ‘K Street whore.’  To compare Daniel Webster to the Taliban is ludicrous,” said Webster Spokesman, Brian Graham.  “Alan Grayson is simply trying to distract voters from his record of higher taxes, increased debt, and rising unemployment.  Central Florida deserves better than Mr. Grayson’s gutter-politics and dirty mouth.”

Daniel Webster, a family man and small-business owner, has dedicated himself to serve the citizens of central Florida with honor and integrity. Daniel Webster served as Majority Leader of the Florida Senate and the first GOP Speaker of the House in over a century.