Alex Jones Tangles With David Hogg on Twitter Over Conspiracy Theory, Invites Him On His Show

Alex Jones Tangles With David Hogg on Twitter Over Conspiracy Theory, Invites Him On His Show 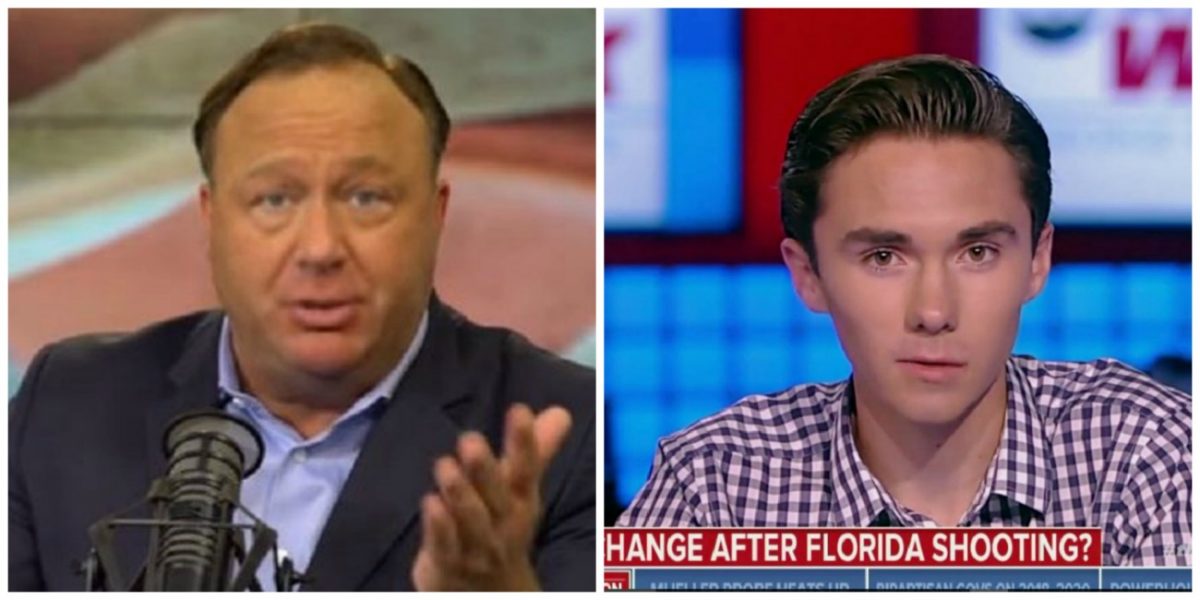 Over the weekend, it was reported that Alex Jones’ InfoWars was given a strike by YouTube over a video that portrayed David Hogg and other Parkland students as paid “crisis actors.” The video, titled ‘David Hogg Can’t Remember His Lines In TV Interview,’ was removed from the page as it violated YouTube’s policies. If InfoWars receives two more strikes in the next three months, the account will be permanently banned.

With Hogg having said this past weekend that those pushing the conspiracy theory are actually “great advertising” for him as it helps amplify his cause of increasing gun control, the student took to Twitter today to fire some shots at Jones. And he let the far-right conspiracist know that he’d love to “come on and clear some of this up” because Jones is a “shit journalist” who cannot figure out what Hogg is doing.

Hey Alex Jones you seem to be really confused as to what I do/who I am I’d love to come on and clear some of this up because clearly as a shit journalist you can’t clearly.

Hogg also asked if Jones had been sued by for spreading lies about the victims of another shooting. Presumably, Hogg was referencing Jones’ claims that Sandy Hook was a false flag which led to families of the victims threatening NBC with legal action over Jones’ Megyn Kelly interview last year.

Wait ?didn’t you get sued for pedaling lies about the survivors and victims of another school shooting? Clearly someone didn’t learn from their mistakes

And not done yet, Hogg dinged Jones for being a “snake oil” salesman.

I might not be great with spelling or punctuation but unlike Jones do my research and don’t sell snake oil to the masses. #Jonesbrandsnakeoil

When your snake oil only makes you THICC 45 days later #jonesbrandsnakeoil pic.twitter.com/UoM9Gi2zUT

Jones, meanwhile, jumped all over Hogg’s seeming willingness to come on his show to discuss Jones pushing the crisis actor conspiracy theory. The InfoWars founder said it would allow him to “set the record straight and clear things up.”

Hi David, it would be fantastic for you to come on. I would be very thankful for that. I want to set the record straight and clear things up between you and I. https://t.co/uHeDxX7Ir8

This then led Jones to shoot off a series of tweets calling on Hogg to contact him while taking issue with some of the things the teenager had said about him.

@davidhogg111 I would love to have you on today to clear up some of the disinformation that has been put out about my statements concerning the tragedy. I notice you’re calling me a “shit journalist” and “snake oil” salesman when I have never called you any disparaging names.

This categorically did not happen. https://t.co/ZsYb98yWy6

@davidhogg111 Also I have never been sued by survivors of any school shooting. Please stop the defamation. My YouTube channel with 2+ billion views has now been frozen after CNN lobbied for it to be closed in your name.

@davidhogg111 Again Mr Hogg, in your name CNN has shut down my speech on YouTube. It is critical that you come out and support the 1st Amendment and not let them use you to end free speech.

@davidhogg111 DM me your email and my producer will set you up. Thank you.

Jones ended his appeal to Hogg to be an InfoWars guest by letting the student know that he is now an activist who is not above criticism while claiming that CNN is using him in order to shut down InfoWars, something Jones has been stating over the past couple of days.

David, you are welcome to come on the show.

Are you aware that CNN is using you as part of a lobbying campaign to shut down Infowars?

You are now a public figure & activist. You are not immune to criticism.

We know your views on the 2nd amendment. Do you support the 1st? https://t.co/uHeDxX7Ir8

It would appear that Jones is upset that in its report on YouTube’s actions against InfoWars, CNN noted that it had noticed more InfoWars videos pushing hoaxes and asked YouTube if they violated the company’s policies.

So I guess one question remains — will David Hogg appear on InfoWars?

UPDATE 2:10 PM ET: Hogg clarified on Twitter that he will not appear on Jones’ show, stating he sent his earlier tweet expressing willingness without realizing how awful some people had been to victims and survivors.

I will not speak to anyone that has had disgusting remarks to victims of mass shootings in the past. I sent that tweet without realizing just how awful so many people have been to victims and witnesses of these events in the past.

This came after Jones posted a video challenging the teen student to a debate.