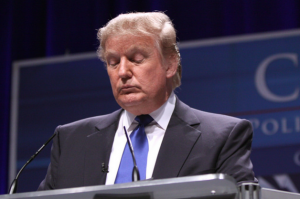 It’s been a busy few days for Newsweek‘s Kurt Eichenwald. He put out a very strongly-worded condemnation of Sean Hannity‘s attacks on Hillary Clinton‘s health yesterday and this morning, he did battle with a Donald Trump supporter over whether the Republican nominee’s health is fair game, too.

His latest Newsweek piece really doubles down on Trump’s old claims regarding his health. Or, rather, it doubles down on his alleged doctor’s claims. In December of last year, Trump released a letter that was supposedly from his doctor. It contained grammatical errors, the fluffed-up superlatives now associated with Trump, and a heading that looked weirdly fake. Mediaite went through it all bit by bit back then. The hospital the guy works at even tried to distance themselves a little because it was so laudatory of the candidate that it struck some as unprofessional.

Statement from Trump’s doctor on his health: pic.twitter.com/bVwR0d8psn

Eichenwald used his piece today to point out that there are parts of that old letter that are even more than unprofessional. The website linked in the letterhead, for instance, routes users to a site that apparently gives out viruses instead of medical advice. Further, Eichenwald spoke to some doctors about the old letter and found that using a personal Gmail address in letterhead is widely considered to be a bad move in the medical community.

Clinton’s physician’s note from last year was wildly boring by comparison. and indicated absolutely no problems with her health. As conspiracies fly about whether she suffers from seizures or other ailments, Trump’s health may continue to be under scrutiny. The one letter alone is providing plenty of fodder. Eichenwald wrote this after questioning why Trump’s letter came from a gastroenterologist — a specialty doctor — instead of a general doctor like Clinton’s:

Unlike the Clinton letter, it does not contain a full medical history for Trump. The letter also has problems with sentence structure and major typographical errors, such as the opening line, “To Whom My Concern.” Most amusing, it says that his medical examination of Trump has “only positive results.” In medical terms, if the test is positive, it confirms the existence of disease. Is this doctor saying Trump has every medical ailment that could be found in examination? Does he not know the meaning of the word? Or, as I suspect, was the letter written by someone in the Trump campaign?

The renewed focus on this old letter could bring about major revelations. The idea that someone within the campaign wrote a doctor’s letter seems far-fetched, but then again, we do have reason to believe that Trump imitated his own PR people decades ago, so anything is possible. We will just have to wait and see what else comes out now that the letter is back in the spotlight.