Standup comic, movie star, and sketch show tsunami Amy Schumer is making “news” over her online shaming of a 17 year-old fan who tweeted a photo with Schumer that contained a caption that she found offensive. It all started when Jackson Murphy, proprietor of the “Lights, Camera, Jackson” blog, was granted a selfie with Schumer at the Critics’ Choice Awards, and tweeted it with the following caption: 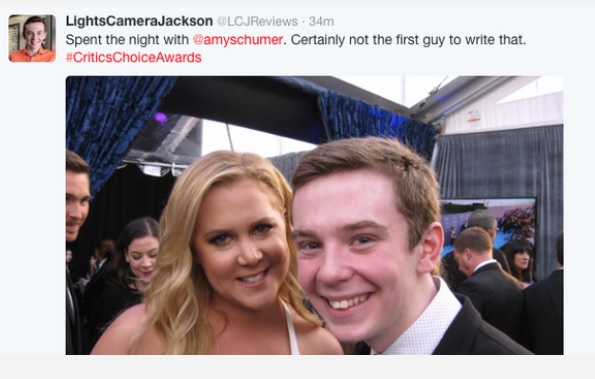 “Spent the night with @amyschumer. Certainly not the first guy to write that.”

Schumer responded with a tweet of her own, which quickly resulted in an apology, which she graciously accepted, end of story:

@LCJReviews @jondaly I get it. Cause I’m a whore? Glad I took a photo with you. Hi to your dad.

@amyschumer I truly apologize. Thought you’d like the joke. I should leave the comedy to you! Thanks for the photo. Glad you won last night!

I truly apologize for the tweet I posted earlier. I’m not a comedian and it wasn’t funny. @amyschumer

@LCJReviews that’s really okay honey. I just remember thinking you and your dad were sweet and it was a bummer to read that

Wait, I’m confused now, is Amy upset that she didn’t get to bang Murphy’s dad, too, or that Dad didn’t tweet about it?

See, that was offensive, and also exactly the kind of joke I would have expected Schumer to make in this situation. Jackson Murphy is absolutely right, his tweet wasn’t funny, but it was obviously an attempt, by a fan, to play along with the joke that Schumer makes in every show she ever does. It’d be like making a selfie joke about Gallagher, and having him respond “Oh, I get it, because I’m the guy who does nothing but smash watermelons.” Yeah, motherf*cker, you are the guy who does nothing but smash watermelons.

Besides, if you believe Schumer’s fans (of which I am definitely one), the thing he’s joking about is nothing to be ashamed of. Context matters.

This is the flipside of a disturbing pattern in which standup comics whine about getting blowback for doing offensive or edgy material, like Ricky Gervais, who won’t stop going on about how awful offended people are. That’s the whole point of doing edgy material. I like Ricky, too, and every other comic who participates in this new pastime, but they really need to get grip. Lenny Bruce was arrested, had his life ruined, and wound up dead. You guys are dealing with mean tweets. Can you imagine George Carlin ever giving a rat’s ass what anyone on Twitter had to say about him?

Whether they’re offending or being offended, comedians need to stop whining about it, and start being funny about it.