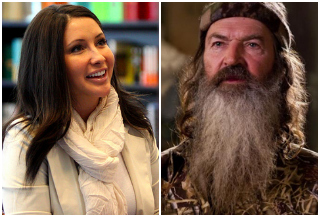 Bristol Palin followed in her mother’s footsteps this week when she penned a blog post defending Duck Dynasty patriarch Phil Robertson from the “hypocritical LGBT community” that was offended by his comments about homosexual sex. “Leave Phil Robertson Alone!” was the emphatic headline of the post on the Christian site Patheos.

“Everyone needs to leave Phil Robertson alone for expressing his beliefs,” the 23-year-old Palin writes. “I think it’s so hypocritical how the LGBT community expects every single flippen person to agree with their life style.”

I hate how the LGBT community says it’s all about “love” and “equality.” However, if you don’t agree with their lifestyle, they spread the most hate. It is so hypocritical it makes my stomach turn. They need to learn how to respect others’ opinions and not just jump to the conclusion that everyone who doesn’t support homosexuality and gay marriage is homophobic.

Palin ends her piece by quoting “this homosexual writer” from TIME Magazine with whom she manages to find some common ground. The link she uses reveals that she’s talking about Brandon Ambrosino, who wrote an article suggesting that the LGBT “engage with” Robertson rather than “silencing” him. The writer does not, however, discuss his own sexual orientation within the piece. Either Palin has some inside information about Ambrosino’s preferences, or found that information elsewhere.

Perhaps Bristol Palin felt compelled to defend Robertson because she herself has come under fire for past incidents surrounding homophobic language. When she was confronted by a man in a bar while she was filming her reality show in 2011, she asked him if he hates her mother Sarah Palin because he’s a “homosexual.” The bar patron accused Palin of being “homophobic” and sued her and the Lifetime network for defamation.

Even more troubling was the scene from Bristol Palin: Life’s A Tripp in which Palin’s then 3-year-old son appears to call his aunt Willow Palin a “faggot.” In another blog post written to “set the record straight” following that incident, Palin insisted her son had “used a different ‘f word.'”