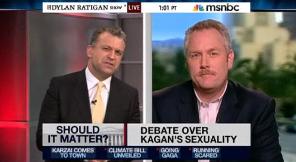 Andrew Breitbart was back on Dylan Ratigan‘s MSNBC show this afternoon to talk about Elena Kagan.

Last appearance saw the debut of “jovial and measured Andrew,” while today it was all about the “irony mustache.”

“What exactly is an irony mustache?” asked Ratigan (and likely every viewer).

I told you when I was wearing a beard at the White House Correspondents Dinner that I would debut an irony mustache. Some people were meant to have mustaches. The Tom Selleck, and people in pornography. But I’m not. I said I’d wear it once. I’m going to shave it when the show’s over. Hopefully it doesn’t take away from the seriousness of the discussion at hand.

The discussion at hand was Elena Kagan – and Breitbart’s belief that we shouldn’t be discussing her personal life and it is liberals who are driving the discussion in the first place.

Here’s the crux of his argument:

I think the American people are kind of dumbed down. I admit i know almost nothing about Constitutional Law. 20, 30 years ago, that’s what they would be talking about during confirmation hearings. But now, since the Clarence Thomas hearings, all we talk about is ‘is the person Black,’ ‘is the person Hispanic,’ ‘is the person gay,’ and unfortunately that’s where we are in America.

Also discussed – why Breitbart went to Tulane University and Lisa Bonet (hint: the topics are related!).

Here’s the full interview (and only ‘irony mustache’ appearance):