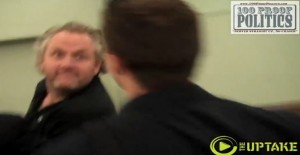 On Friday, we reported that Andrew Breitbart was confronted at the liberal Netroots Nation conference in Minneapolis. As is often the refrain on Breitbart-related stories, the full video is now available (from The Uptake), and it is compelling. Breitbart’s conversation with Dave Weigel is interrupted by questions about his credentials, his sexuality, cocaine, and a drunk who dropped Breitbart’s name the night before. The dramatic video shows Breitbart’s full harague-filled exit from the hotel.

There’s a lot to unpack in this clip. As sheer political conference confrontation-porn, it delivers on every level, with lots of shouting, mobbing, and a great moment, at about the 4:37 mark, where Breitbart whirls on his inquisitor, DailyKos blogger Ryan Clayton, and practically eye-lasers him: (from The Uptake)

Breitbart later referenced the incident during a speech at the Right Online conference, missing the point somewhat by criticizing Clayton’s journalism. The litany of “when did you stop beating your wife” questions was obviously intended to be some kind of meta-critique of Breitbart, but after the first few seconds, it devolved into a fig leaf for hurling insults, and an excuse to promote a smear.

Clayton accuses Breitbart of being linked to a man who allegedly harassed a pair of Muslim women on the streets of Minneapolis, saying the man “said he worked for (Breitbart).”

According to blogger Sue Wilson‘s account, though, all the man did was claim that he was calling Breitbart on the phone:

The story started the night before when two women ventured into the streets of Minneapolis wearing the traditional Hijab (headscarf.)  They were approached by John Hugh Gilmore, a 52 year attorney and self described Conservative who blogs for “Minnesota Conservatives.”   According to police, he asked the women what they thought of Ayaan Hersi Ali, a Somali who is a fellow at the conservative American Enterprise Institute who decries Muslims.  The women told him they weren’t exactly fans.   The inebriated Gilmore then became upset and started harassing the pair, asking what right they had to be in this country, until 60 onlookers intervened.  Police were called and arrested Gilmore, but not until Gilmore tried to reach Andrew Breitbart on his phone.

That’s a far cry from claiming that he worked for Breitbart, and anyone who knows Breitbart even a little bit knows that he’s constitutionally incapable of not answering his phone. Reached for comment this morning, Breitbart said, “The hijab story, like the Carson/Lewis n-word story, speak to the need of leftists to manufacture desperate narratives that conveniently frame conservative opposition as ‘racist’, ‘sexist’, ‘Islamaphobic’, ‘homophobic’, etc. In both cases I’m front and center exposing these tiresome and tedious reflections on the failure of the left to defend what they stand for, and instead resort to freshman year dorm orientation debate stifling PC tactics.”

As for the “tough question” about cocaine use, Breitbart did respond that he doesn’t have a cocaine habit, before questioning the relevance of whether he had ever done cocaine. Breitbart referenced President Obama‘s youthful drug use in a C-Span interview last month, in response to a question about his own college drinking, and seemed to be making the point, then, that it’s not really relevant. For what it’s worth, given his already-manic personality, it’s unlikely that the fabric of space-time could withstand Andrew Breitbart on a strong cup of coffee, let alone a coke bender.

But Clayton’s pointed questions about Breitbart’s sex life, particularly whether he had ever slept with a male prostitute, carry an ugly subtext that permeates liberal critiques of some conservatives. The suggestion that Andrew Breitbart is gay is clearly intended to get under his skin, as an insult, which undermines the notion that there’s nothing wrong with being gay, and undermines the respect that we demand for LGBT people to decide how they are identified, how they identify themselves. At its most basic, it is the equivalent of schoolyard taunts of “Oh yeah? Well, you’re gay!”

Again, for what it’s worth, Andrew Breitbart was not only at the biggest, gayest party I’ve ever been to (the GOProud party at CPAC), he threw it. As a married father, he’s an “out” heterosexual, and his spearheading of the GOProud event appears to demonstrate that he’s not insecure about it. In any case, there are legitimate criticisms to be made of the way Breitbart’s sites cover gay issues, and of GOProud, but calling Andrew Breitbart gay is illegitimate, and reprehensible.

Finally, throwing Andrew Breitbart out of the conference because he didn’t have papers was perfectly within their rights, but then following him out to chants of “Coward!” is a little bit counter-intuitive. He came to the conference prepared to face tough questions (he told Mediaite as much on Friday), and while greeting him with meta-smears and throwing him out for not having credentials might have been “clever,” it certainly wasn’t brave.