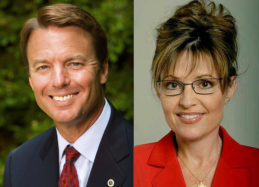 Andrew Sullivan devoted some space today to explaining why he is so (sometimes disturbingly) relentless in his criticism of Sarah Palin and yet, in hindsight, dropped the ball where John Edwards was concerned (no pun intended). Says Sullivan:

So why did I let it go? My first reason is my leeriness of investigating people’s sex lives. I had my own ransacked a decade ago and it was a brutalizing experience. The exposure of such intimate thing coarsens our discourse, violates human dignity and should, in my view, be done only if massive hypocrisy is on the table and the person is more than just a minor public figure. That’s why I’ve long opposed outing people.

So I steered clear out of this sensitivity. I barely covered the Tiger Woods stuff for those reasons, and even came to defend Clinton in the end because of the callousness and fanaticism of Ken Starr. But there was something else at work here in the case of Edwards, I suspect.

As much as I generally enjoy Sullivan, I think I have to call bullsh*t here: how is spending twelve months-plus relentless questioning (with zero proof, it should be noted) the parentage of Trig Palin not an investigation of someone’s private life and/or something that “coarsens our discourse, violates human dignity.” It’s not. But here is how Sullivan explains the difference, or what I would term hypocrisy, actually.

My mistake as a journalist was in making an assumption of a baseline of decency in public officials that it is not my job to make. My job is to assume nothing and to trust nothing until verified. One doesn’t have to pry; but when rumors emerge, we should not be deferent with public officials. We should ask questions.

With Palin, people assumed that because she was a governor, she had a baseline level of competence, logic, general knowledge and mental stability. Wrong. On the Trig stuff, it was just too absurd to doubt her story, however factually implausible it appeared. With Edwards, people assumed that his own good looks, and his much less glamorous, though still lovely, wife implied a marriage of depth and love.

So he didn’t pry into Edwards’ personal because Edwards was good looking and had a lovely spouse (even though rumors about Edwards sliminess were rampant for many years in the sort of political circles Sullivan moves in) but he did and still does dig into Palin’s because….yeah, the argument sort of falls apart. If I didn’t know better I might assume it was initially because she’s a woman and/or because he didn’t like her politics (there was no love lost on Sullivan’s part for Hillary Clinton either, by a long shot). Conclude what you will. In the meantime, Sullivan ends with an apology to his readers and joins the growing online chorus calling for the National Enquirer to get a Pulitzer nom for their Edwards coverage.