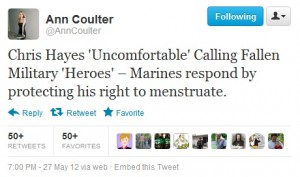 Aside from the counter-intuitive use of her own gender as an insult, Coulter’s tweet actually goes a long way in proving Hayes’ underlying point.

On Sunday morning’s Up with Chris Hayes, the host mused about the way the word “heroes” is marshaled “in a way that is problematic,” but the resulting headline focused on his entree to the topic, that he is “uncomfortable about the word.”

Both could be considered fair interpretations of what Hayes said, but they are, self-evidently, interpretations. Both rely on a leap that Hayes never actually makes, from his discomfort with the word (and the way it is “marshaled”) to a reluctance to apply the word to fallen soldiers. It’s a reverse-engineered interpretation designed to bludgeon Hayes, rather than to convey what he actually said. The problem isn’t with calling fallen soldiers “heroes,” it’s with the things that word has in common with justifications for war.

As much as I hate to give Coulter the soul-nourishing attention she craves (she slammed a liberal and insulted women! But she’s a woman! Edgy!), her reaction is illustrative on several levels. The most amusing of these is the fact that Coulter shills for a party whose current “personhood” vogue actually is a threat to the right to menstruate.

More to the point, though, Coulter’s assertion that the Marines are protecting Chris Hayes’ right to do anything is a prime example of the way the heroism (or whatever word you want to use) of our individual soldiers is marshaled in a way that’s problematic. Our love and reverence for our brave fighting men and women (who are, I suppose, collateral damage in Coulter’s anti-woman shot) are used to inoculate our government from critical thought about what it is we ask them to do.

In the macro, the US military exists to protect Chris Hayes’ rights, and mine, but their mission in Iraq, for example, had little or nothing to do with that. Saddam Hussein was not a threat to the United States, and the Iraq War did nothing to protect our rights. Specifically, Mitt Romney is a much greater threat to “menstruation rights” than Saddam Hussein, or any foreign enemy, ever has been.

More broadly, the valor and sacrifice of our troops has resulted in the deification of the military as a whole, so that now, politicians are not only comfortable with showing almost complete deference to top military leaders, they’re basically required to. It wasn’t long ago that such obeisance to “the generals” would have been seen as a bug, not a feature. We’re not a military dictatorship.

Having said all of that, I would not have expressed the point the way Hayes did, because, as he said later in the segment, there is an inherent heroism in volunteering your life in service to your country. The word “hero” isn’t the problem, the theft of it, for political purposes, is. This isn’t purely a Republican phenomenon, either; the same notions of “heroism” as political talisman contributed mightily to the selection of John Kerry as the Democrats’ rejoinder to President Bush.

Hayes is no neophyte, he must have realized, shortly after saying it, that his “uncomfortable” quote would become the headline, that this type of outrage would ensue, and that no one would bother to watch the whole segment to see what he really meant. If Chris Hayes’ show trafficked in talking points and contrived conflict, his thought would have come out as a dull sound byte, or not at all. It is that thinking-out-loud honesty that makes the show special, and no Ann Coulter tweet or right-wing dogpile should change that.

If you only watched the clip that has Coulter in an uproar, you missed Hayes’ stirring intro to yesterday’s show, a provocative, informative, and poignant essay on Memorial Day that deserves at least equal time. Here’s that clip, from MSNBC: