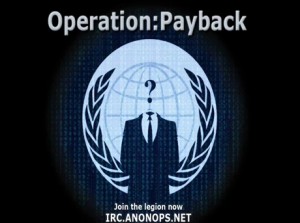 The video comes with the following text:

“In a time of universal deceit, telling the truth becomes a revolutionary act.”

“You may think your actions are meaningless and that they won’t help, but that is no excuse, you must still act.”

“He who gives up freedom for safety deserves neither”

~ Ben Franklin Hello World. We are Anonymous. What you do or do not know about us is irrelevant. We have decided to write to you, the media, and all citizens of the free world to inform you of our intentions, potential targets, and our ongoing peaceful campaign for Freedom of Expression. Anonymous is peacefully campaigning for Freedom of Expression everywhere, in all forms, for all platforms.

The recent news of our efforts have been, at best, misinformed. We are not a terrorist organization or a group of “hackers” as governments, demagogues, and the media would have you believe. We are a diverse group that touches every aspect of philosophy, religion, and politics ever conceived by man. At this time, Anonymous, as a distributed consciousness, is focused on protesting peacefully for Freedom of Expression on the Internet. We ask the world to support us, not for our sake, but for your own. When governments control information they control you. We will resist until our dying breath. Pay attention citizens and governments of the world.

History is full of examples that show that governments can change when people stand united.

As an example in recent history: During the Civil Rights Movement in the United States in the 1960s access to many businesses were blocked as a peaceful protest against segregation. In their efforts, the protesters of the time managed to make drastic changes to police and governments by refusing to be silenced.

In the spirit and memory of that movement and many others we will refuse to be silenced. We will protest!

It is here that we proclaim: Any individual, organization, corporation, and/or government entity which supports Freedom of Speech and a Free Internet is an ally of Anonymous. If you work to suppress Freedom of Expression and a Free Internet your efforts will be halted. Where others have made this promise and failed, we make this promise and aim to keep it for everyone. We would like to ask that you as a citizen, organization, media entity, or government do the same by joining us.

The debate over the actions of Julian Assange have been hotly discussed in recent days, often in the most hyperbolic terms. The status quo have predictably labeled him a terrorist and enemy combatant, but libertarians and extreme leftists, who both share a deep distrust of governments and secrets, seem to agree that Assange should be labeled a hero.

Operation Payback is a loosely organized effort that is reported to have been responsible for attacking several websites of corporate institutions who have stopped supporting WikiLeaks efforts, namely Mastercard, Visa, Amazon, Paypal’s Blog and Swiss based Postfinance.

Watch the video from Anonymous below: