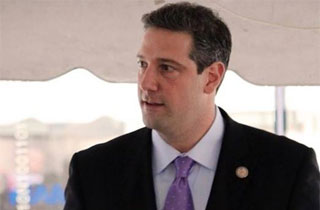 After nearly 12 years in Congress and multiple votes supporting anti-abortion legislation, Rep. Tim Ryan (D-OH) announced in an op-ed a complete 180: He is now pro-choice.

Rep. Ryan, a Blue Dog Democrat, was elected in 2003, raised in a Catholic household, and held a fairly strong pro-life stance ever since he entered office. Jezebel has a breakdown of his legislative history, but noted that his position had begun to soften in 2009, when he was kicked out of Democrats for Life of America for sponsoring a bill that would allow better access to birth control and sex ed. (“I can’t figure out for the life of me how to stop pregnancies without contraception,” he said at the time.)

Now, in an editorial for the Akron Beacon-Journal, Rep. Ryan says that after talking to numerous women in his district, his views on abortion have changed drastically: while he now believes that the decision to have a child should be a “personal decision,” “the heavy hand of government must not make this decision for women and families.”

“There are endless stories about women in troubling situations — the woman who became pregnant and has a violent spouse; the woman who lost her job and is unable to afford another child; or the underage girl worried she’ll be thrown out of her house if she reveals her pregnancy,” he wrote.

“Each of these women lived through difficult and personal situations with few options and no clear path to take. This is why there is no easy answer.”

He continued with a vision of how government could step in:

As my friend and colleague U.S. Rep. Rosa DeLauro says, “Nobody celebrates abortion.” No woman makes this decision lightly. Each and every American deserves the right to deal with these difficult situations in consultation with their families, close friends or religious advisers. No federal or state law banning abortion can honestly and fairly take into account the various circumstances that make each decision unique.

Where government does have the ability to play a significant role is in giving women and families the tools they need to prevent unintended pregnancies by expanding education and access to contraception. We must get past the ignorance, fear and — yes — discrimination against women that lead to restrictions on contraception and age-appropriate sex education.

Only then can we hope to continue to make significant advances in what should be our true, shared objective: reducing the number of unintended pregnancies, which make up the vast majority of abortions. Isn’t that a simple approach on which we all could agree? This is not a partisan issue, but instead a personal one.