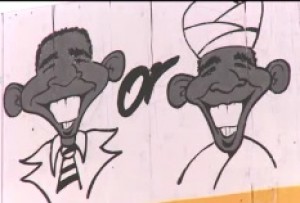 Some call it freedom of speech and others are calling it plain racist. Either way, it’s attracting a lot of attention to a suburban Denver car dealer. The billboard, located in Wheat Ridge, Colorado, shows two cartoonish images of Barack Obama, one wearing a Muslim turban and reads “President or Jihad?” It also raises the Birther issue with the line “Birth Certificate – Prove it!” Regardless of how one feels about President Obama, its hard not to ask if this sign goes too far.

The sign belongs to a car dealership. “Since Fort Hood, I’ve had it,” owner Phil West told FOX 31 News Friday. “You can’t suggest things. You can’t profile. You gotta call a spade a spade.”

“Everything I have read about Mr. Obama points right to the fact that he is a Muslim. And that is the agenda of what Muslim is all about. It’s about anti-American, it’s about anti-Christianity,” West said.

The Anti-Defamation League condemned the sign, as did AM760 radio host David Sirota, who discussed the sign and interviewed West on his program Friday morning.

“It’s out of control,” Sirota said. “This conservative hatred of Barack Obama is out of contol, and this brings together all those strands of it: the racism, the anti-Muslim fervor. It’s one thing to criticise the president on health care, or Wall Street reform, or immigration. But this is outrageous. And I think it’s a fair question to ask why these questions about religion and ancestry are being directed so viciously at the first African-American President of the United States.”

Yeah, we’re going to go with “too far” on this one.