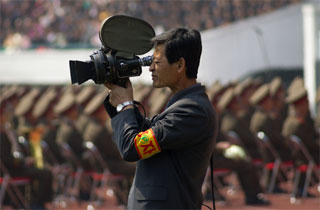 The Associated Press, the only news agency with a bureau in Pyongyang, has an ironclad agreement with the government of North Korea to only print news favorable to the regime, and, in some cases, news that can only be classified as DPRK propaganda, NK News reported in an extensive report.

The watchdog group obtained the draft copy of the agreement between the AP and the Korea Central News Agency (KCNA), the official state media arm of the DPRK, which the AP agreed to in order to open a news bureau in the secretive country in 2011. But despite being the “first independent Western news bureau” to operate out of Pyongyang, and despite their promises to operate like a normal AP bureau — that is, without interference from the government, like pretty much any news outlet ever — the draft of the agreement clearly dictates what the AP is and is not allowed to print, basically forcing the AP to become another propaganda arm of the regime:

The document says the AP will “serve the purpose of the coverage and worldwide distribution of policies of the Worker’s Party of Korea and the DPRK government,” that changes to state-produced content would have to be made with “full consultation between the two sides,” that the “KCNA shall nominate” the full time staff the AP would hire for their Pyongyang bureau, and that “the average $12,000 per month” for salaries and office rental fees be paid by a “method requested by (the) KCNA.”

“(The) KCNA shall be responsible for all the procedures inside the DPRK for the opening and operation of Bureau,” the document says, the authenticity of which was confirmed by interviews with 14 current and former AP staff involved in news production from the AP’s Pyongyang bureau…

By ensuring the “worldwide distribution of policies” of the WPK and the DPRK government, the U.S.-based AP would help promote “mutual understanding between the two peoples and (contribute) to the improvement of relations between the two countries,” the agreement says.

According to the sources cited by NK News, the Pyongyang AP bureau is run by the KCNA, staffed with employees selected by the government, and paid with money that the AP paid to the government of North Korea, in “bulk cash” delivered by couriers. (Yes, that is an actual detail in their report.) Furthermore, all copy filed by the reporters must be run by the Ministry of State Security, which has final say over what can be published. Even their offices are located inside government buildings.

The level of government control over the AP goes further than the agreements laid out in the contract, however:

Former U.S. detainees Matthew Miller of Bakersfield, California, and Jeffrey Fowle of Miamisburg, Ohio, recounted to NK News that while they were interviewed and filmed nine separate times in August and September by officials representing themselves from the AP, remarkably little was ever published by the AP.

Despite the exclusive material, no stories, photos or video from three interviews were ever published. In other stories, they were never quoted. In still other interviews, AP used a single quote – quotes the Americans said reflected the government political line their captors specifically instructed them to make.

Jeffrey Fowle, who was arrested in May for intentionally leaving a bible in a public bathroom while on a tour group, told NK News: “For all the interviews with AP, I was heavily coached on what to say. (My captors and I) would rehearse it at least six or eight times.”

The first interview conducted by the AP news bureau with the prisoners on August 4 was a world exclusive on a story prominent in headlines for four months – and the AP never published any story based on this material at all.

Notably, the Pyongyang AP bureau has not filed anything on prominent North Korean news stories in the West, such as the six-week disappearance of Kim Jong-Un, or the Sony hacks caused by The Interview.

“Are the North Koreans using the AP? Of course they are,” Mike Chinoy, a former CNN reporter who covered North Korea, told NK News. “Where AP is getting themselves in trouble is trying to suggest that their news gathering operation is not tightly controlled by the North Korean secret police. Of course it is. That is how it works in North Korea. It is impossible to credibly suggest otherwise.”

Read the rest of the very extensive report below.

UPDATE (11:14 AM EST): In a statement to Politico, AP spokesperson Paul Colford called the report “laugahble,” saying that the journalist responsible based his reporting on a very early draft of the final contract, and that his copy was “full of errors, inaccuracies and baseless innuendo.”

Furthermore, Colford said that the editor of NK News had initially told the AP that they would not print the article. “It is regrettable that the website decided to reverse course on Dec. 24 because of a newly found ‘draft agreement,’” Colford said.

In the late 1990s, Nate Thayer, a former AP stringer, became disgruntled over a distribution agreement with AP covering video he had shot in Cambodia. More recently, he dismissed the value of AP’s North Korea bureau shortly before he sought from AP detailed proprietary information about the bureau for further articles that were published on Dec. 24 by NKnews.org.

No serious news organization would hand over the kind of business agreements, salary information and other payment documentation that Mr. Thayer sought. His latest articles from Dec. 24 are full of errors, inaccuracies and baseless innuendo. The “draft agreement” between AP and North Korea’s KCNA news agency that he cites is remote from the final document. Among other inaccuracies, AP does not distribute outright KCNA stories, as Mr. Thayer concludes, but at times AP cites KCNA reports, as do most other news organizations, including his publisher. Because of his reliance on this “draft agreement,” he makes the laughable assertion that AP’s Pyongyang bureau submits to censorship by the North Korean government.

It is unlikely that Mr. Thayer spoke to as many AP sources as he claims. Indeed, Chad O’Carroll, the editor of NKnews.org, told an AP news leader several days ago that he would not publish Mr. Thayer’s latest attack against AP after all. It is regrettable that the website decided to reverse course on Dec. 24 because of a newly found “draft agreement.”

To Mr. O’Carroll, we had provided this statement last month.

“We recognize the unique challenges in reporting from North Korea. We are proud of our work in all formats and will continue to provide robust coverage going forward that will widen still further the world’s view of this little-known state.

“Regarding AP interviews with the three American prisoners and coverage of court proceedings: In accordance with normal practice, AP editorial decisions were made about the news value of very similar material available from three different interviews in short order from a captive individual. When we felt the material was newsworthy, we filed stories; when we felt it offered nothing new, we passed.

“Journalistically, our local staffers in Pyongyang are supervised and in regular contact with their supervisors. We rely on our international staff for our journalism and the local employees do not ever file or transmit stories on their own, independent of supervision. AP work is not submitted for any kind of review by North Korean authorities.

“AP does not submit to censorship. We do not run stories by KCNA or any government official before we publish them. At the same time, officials are free to grant or deny access or interviews.”