Republicans Mike Lee and Tom Cotton Go To War on Twitter: Everything in His Tweet Thread is ‘100% Fake News’ 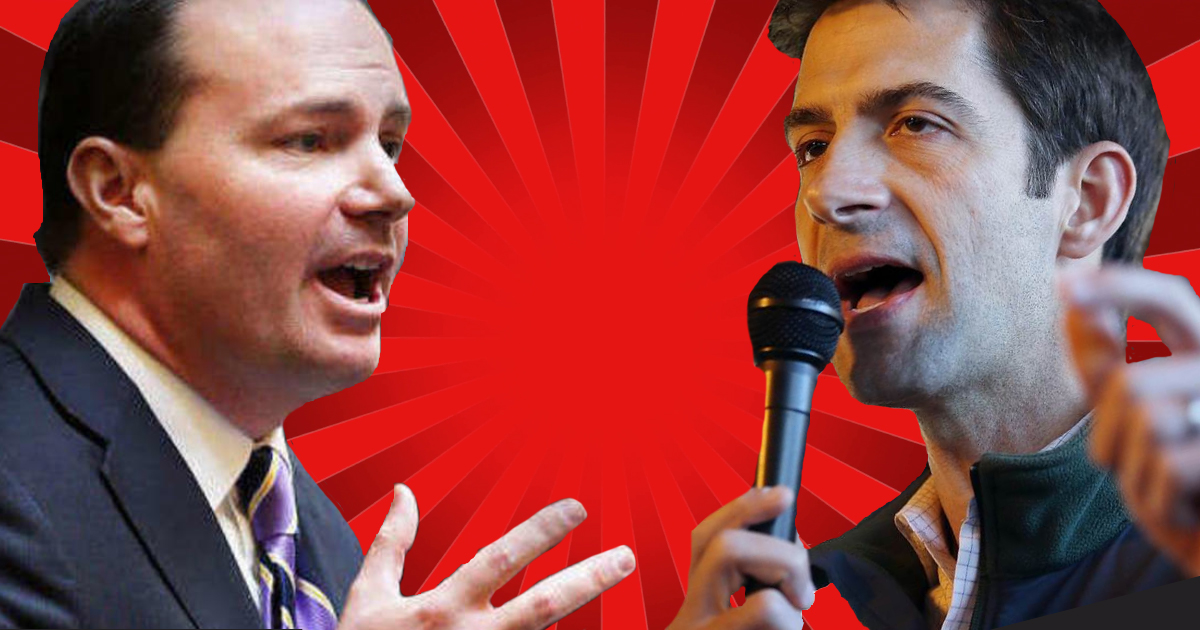 It’s Twitter beef day, apparently. First it was Democrat-elect versus Republican electorate, then it was Axios founder versus Axios critic, and now we have Republican versus Republican, as Senators Mike Lee and Tom Cotton have it out.

It all started with a Democrat, actually. Sen. Amy Klobuchar (D-MN) tweeted and quoted an article from the New York Times regarding the First Step Act, a compromise legislation for reforming prison and sentencing laws in the U.S. Senate Majority Leader Mitch McConnell, the report says, told President Donald Trump that the legislation is unlikely to pass this year.

Klobuchar quoted a portion of the article covering Cotton’s objection. “Mr. Cotton, who has been perhaps the loudest critic of the bill’s sentencing changes in the Senate, urged colleagues to slow down the process, saying that the bill’s impact and implications were too expansive to push through without hearings,” it reads. Klobuchar objected that there have been multiple hearings.

“Mr. Cotton (perhaps loudest critic of sentencing changes) urged colleagues to slow down, saying that the bill’s implications were too expansive to push through without hearings” REALLY? We’ve had multiple hearings. Time for action. Pass #FirstStepAct https://t.co/kzZ9nyBfRR

There have been no hearings on this bill. Why are proponents afraid of hearings & letting members find out what’s in it? Maybe because it gives early release to “low level, nonviolent” criminals like those convicted of assaulting police, even with deadly weapons (USC 111(a))… https://t.co/lQnYGfF1o0

Which, in turn, prompted a quote retweet and thread from fellow Republican Mike Lee, who helped author the bill, and thus the war was joined.

I highly respect my colleague from Arkansas but everything in his tweet and this thread is 100% Fake News. 1/ https://t.co/fFeHMxLpBf

If @SenTomCotton has good faith problems with this bill then he should welcome a full and open debate on the Senate floor where he can offer amendments to provisions he finds objectionable. But first this bill needs to be brought to the Senate floor so debate can begin. /END

In 2018 Republican politics, few insults cut as deeply as “fake news”, so despite the protestation of high respect, Lee fired quite a first shot. But even though each Senator continued making their case in their own threads, they weren’t done with the back and forth.

.@SenMikeLee no early release? Look at text. Eligible prisoners – including those who assault law enforcement officers with deadly weapons – earn new “time credits” for “pre-release custody or supervised release," which is why sheriffs call this dangerous. https://t.co/a8ahFebRVU

Look at the bill. Inmates also get early release in many other sections, including retroactive application of Fair Sentencing Act, reduced punishments for trafficking fentanyl under 841(b), and retroactive expansion of “Good Time” credits. pic.twitter.com/snCtIcHjJh

Look forward to debating this with you on the Senate floor!

This is a complete subject change from the claims in your original tweets, @SenTomCotton. You clearly have some concerns with the bill, and I look forward to debating all of them on the Senate floor. https://t.co/kmDbZwPVRs