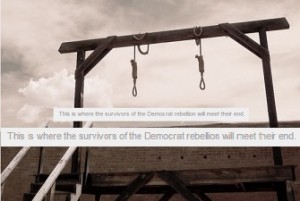 The mass shooting in Oregon kickstarted the “conversation” over gun control for a hot minute, earned Ben Carson a few days worth of headlines, then quickly faded from the national media’s radar, but there’s another conversation about guns that never ends. It’s a conversation between the paranoid likes of, say, the sheriff who’s investigating that mass shooting and the organization responsible for organizing and stoking them, the National Rifle Association.

That conversation took a simultaneously hilarious and frightening turn this week when the official Twitter account for the millions-strong NRA posted a panicky message warning about imminent “forcible disarmament,” and endorsing armed rebellion:

Gun Confiscation Fantasies Are Fast-Tracking Dems to Destruction… https://t.co/Ou0AIpdu3R #2A

Make no mistake, anti-gunners are “calling for forcible disarmament…” #2A https://t.co/Ou0AIpdu3R

That tweet is getting a lot of play on social media, but with most of the attention focusing on the “fear-mongering” gallows image featured in the blog post they’re linking to. Out if context, it’s a little bit alarming, but if you know what drama queens these people can be, it’s kinda par for the course. Their mantra is “from my cold dead fingers,” for Pete’s sake.

The hilarious part is what prompted noted gun-nut and anti-Obama racist Bob Owens to write the pants-loading screed that the NRA endorsed, the truly existential threat to legal gun ownership that is an art teacher’s Facebook comment:

The final two paragraphs of Ostendarp’s rant seem to sum up the collective id of the radical left in the United States at this moment in time.

I don’t understand your rural traditions or you tribal culture of whatever it is you people call a lifestyle. Civilized people do not own arsenals, ok? Your paranoia is turning you into a bunch of f*cking savages. You are foaming at the mouth, grunting, and jumping up and down. With guns.

Civilized people can’t get on peacefully with good living as long these nuts are out there with guns. Period. All of you need to be forcibly disarmed.

Perhaps it shouldn’t be surprising that a flaky and delicate art professor more concerned with feelings than logic would be so un-self-aware, and succumb to the very sort of violent tribal behavior he imagines in others.

To be fair, Owens does cite another terrifying threat to gun owners, the potent weapon of tyranny that is the Salon-dot-com Hot Take:

Another academic, writing at the perpetually deranged online e-zine Salon, wants gun owners to be shot.

Actually, no. What Salon’s D. Watkins wrote was clearly an attempt at provocative satire, but I also wouldn’t quibble with gun owners who took offense, as it clearly was intended to offend them. In Owens’ case, the art teacher and the Salon columnist did much more than offend, though, they provoked a very clear threat:

We do not want a civil war against the radical left wing of the Democrat Party, but let it be made abundantly clear that if they start one, they will be utterly destroyed by armed free citizens, as the Founders intended.

Owens doesn’t describe, in detail, what the triggering event would be for this armed destruction, but if a Facebook comment is all it takes to get him going, I’m thinking this is probably a low bar.

Let’s be clear about this, even in the wake of the latest mass shooting, the only thing being widely proposed is a strengthening of background checks, which is a drastic fallback from the post-Newtown push for bans on assault weapons and extended magazines. All of these positions enjoy clear majority support.

Ordinarily, the deranged rantings of a gun-humping lunatic would not be cause for alarm, certainly no more than a hot-take satire at Salon, but there is a frightening bit of asymmetry at work here. The art teacher and the columnist are just that, an art teacher and a columnist, whose ideas are self-evidently not widely shared.

Bob Owens’ paranoid pee-pantsing, however, carries the endorsement of the most powerful lobbying organization in the country, and is backed up not only by its armed membership, but by law enforcement personnel who reserve the right to ignore federal law. In turn, these lunatics own the Republican Party lock, stock, and smoking barrel, including members who, themselves, reserve the right to resist the law using deadly force. These people are truly dangerous. Maybe we should take their guns away.