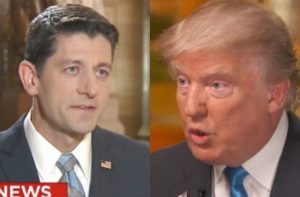 Trump’s angry tweets are a response to Ryan’s announcement Monday that he will no longer actively campaign for the GOP candidate, redirecting his energy instead toward down-ballot races. Ryan stopped short of completely withdrawing his announcement.

Trump blasted Ryan as a “weak and ineffective leader” who was giving him “zero support.”

Trump also claimed that he won the second debate “in a landslide” according to every poll — which is completely totally false.

Our very weak and ineffective leader, Paul Ryan, had a bad conference call where his members went wild at his disloyalty.

Despite winning the second debate in a landslide (every poll), it is hard to do well when Paul Ryan and others give zero support!

Trump also tweeted that he was pleased to have the “shackles” taken off him, indicating that he will “fight for America the way I want to” and will no longer be constrained by the interests or directives of the party which he leads.

It is so nice that the shackles have been taken off me and I can now fight for America the way I want to.

He also said that Democrats were far more loyal to each other than Republicans.

Fissures in the GOP have been erupting since Friday when 2005 audio went public, showing that the Republican candidate for President once used the phrase “grab them by the pussy” to describe the way he felt he was permitted to touch women because of his fame. Ryan condemned the remarks.

Trump said that “disloyal” Republicans were “more difficult” than Clinton, and he proclaimed that he would “teach” them how to win.

Disloyal R’s are far more difficult than Crooked Hillary. They come at you from all sides. They don’t know how to win – I will teach them!