On Wednesday, President Obama placed a heavy burden on Vice President Joe Biden when he announced the formation of a task force to combat gun violence that will have scant weeks to deliver proposals, which the President will then push toward enactment. The shelf life of the political will to do this makes such a deadline necessary, as surely as the danger that gun violence poses to our citizens, but that’s all the more reason for the things the President recommended at that press conference, like a renewed federal assault weapons ban, to disappear in the task force’s rear-view mirror.

Earlier this week, I wrote a column which pointed out that Connecticut’s supposedly “strict” gun laws allow for the purchase and possession of an AR-15 (like the one used in the Sandy Hook Elementary School killings) outfitted with a grenade launcher. The point of that column was not that we should fear a rash of grenade assaults, but that our definition of “strict” gun laws is completely useless. When MSNBC’s Tamron Hall pointed this out to Connecticut Senator-Elect Chris Murphy, he confirmed the provisions of his state’s law, and pointed out that it was based on the federal assault weapons ban that then-Senator Joe Biden helped pass in 1994, and which expired in 2004:

Sen.-Elect Murphy is correct that his state’s assault weapons ban largely mirrors the expired federal ban, which has led many to conclude that since the weapon used in Friday’s massacre, the Bushmaster AR-15, was purchased legally in Connecticut, that the old federal ban would not have mitigated that tragedy, either. That’s not true, however. The federal ban differs from the Connecticut law in two key areas. Both laws specifically ban the Colt AR-15, but the federal law contains language banning any copies or duplicates of specified weapons, whereas the Connecticut law does not. Since the weapon used Friday never had to pass that federal standard, there’s no way to know if it would have fallen within the expired ban. Here’s a picture of both weapons, one banned under Connecticut’s law, one not. Can you tell the difference? 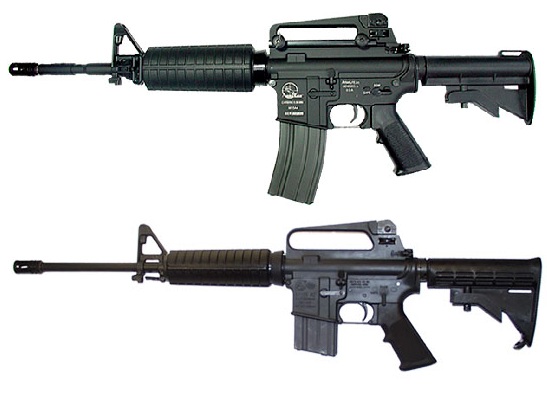 The legal weapon is actually the one at the top, with the giant banana clip. That’s your “strict” Connecticut law.

The expired federal law also banned ammunition magazines with a capacity in excess of 10 rounds. The Newtown shooter used several 30-round clips to carry out his crime, and when shot himself as police closed in, still had plenty to spare.

It’s tough to say exactly how these differences would have affected Friday’s tragedy, but if the anti-regulation’s argument is that the federal law would simply force mass murderers to become more efficient killers, that sounds like a loser. What this tells me is that a 10-round clip is too much, especially if you can carry a sack of them with you and changed them out in seconds. The federal law, along with the supposedly tougher ban proposed by Sen. Dianne Feinstein and endorsed by President Obama, also allows grandfathering of existing high-capacity magazines, which should start the stampede in about yesterday.

Both the expired law and Sen. Feinstein’s nascent revision begin by banning specifically-named firearms, and although Feinstein promises to quintuple the number of models listed, even with language about “copies” or “similar” weapons, gun manufacturers can work around those restrictions, as they did before. Neither law does much about semiautomatic pistols, unless they have two added features like a silencer, or a rifle guard on the barrel. Making a shooter instantaneously reload after 10 shots gives victims more of a chance than they have now, but still not much of a fighting chance.

Sen. Feinstein’s bill would have been a “good start” in 1994, when the political winds that Joe Biden faced made passage of his bill nearly miraculous, and we were still arguably innocent of all the ways it could be circumvented. Since where you start in a negotiation is rarely where you finish, Sen. Feinstein’s bill would probably wind up looking like the 1994 bill by the time it gets passed, if it passes at all.

If we want to end up in a reasonable place today, we need to challenge the fundamental assumptions that Biden’s ban, and Feinsteins, make. For example, what is the purpose of a detachable clip, why does a civilian need that? Most hunters will tell you they don’t need more than a couple of shots at a time, and ten shots at target practice seems like a reasonable interval to reload. Why encourage hoarding by accepting that all existing weapons should be grandfathered? It may be impractical to just round all of those weapons up, but why not prohibit their transfer, enact tough registration laws on them, and regulate where and how they can be stored? Why not require the owners of grandfathered weapons to carry insurance on these weapons?

Similarly, the closing of the “gun show loophole,” which allows firearms to be purchased at gun shows without a background check, is a poor starting point if we want to end up with a reasonable way to restrict who has access to guns. At a minimum, potential gun purchasers should have to pass a drug and alcohol test and a psychological evaluation, and be required to demonstrate competency to safely shoot and store firearms, along with a knowledge of state and federal gun laws.

To be sure, the President didn’t mean for measures like the assault weapons ban to be the end point of our action on gun regulation, but too much of the discussion lately has left the impression that this is the right ballpark, that “common ground” like this is the North Star that we should set our legislative compass to. If we are to mitigate gun violence in any meaningful way, though, we need to start out several galaxies away from that point, and, rather than seek compromise with the party of the NRA, do what is right.