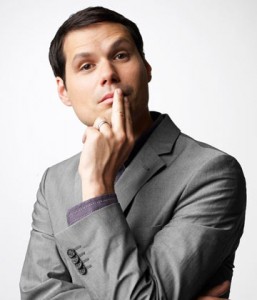 This weekend at a stand-up show in Ohio, things got decidedly unfunny when an audience member told Michael Ian Black that saying you like President Obama is like saying “Heil Hitler.” Black went off on the audience member, yelling at him until he left. He later though, wrote an interesting blog post about the situation and the problems with using Hitler in political discussions. All due respect to Stewart and Colbert, but it’s intriguing how good non-political comedians sometimes are at analyzing the level of political discourse in this country.

“It’s the late show on a Saturday night in Columbus, Ohio. I’m halfway through my set and I mention Barack Obama. Some scattered boos. Which is normal. Somebody always hates the president, no matter who that president might be. In this case, the president is Obama and I am a fan, so I always ask they are so mad at him.

‘Why are you mad at the president?’

‘Because he’s an idiot.’

‘Because he doesn’t do anything.’

‘Because he broke his campaign promises.’

That’s usually as far as people are able to go. They’re mad but they don’t know why. Which is always funny, at least to me. In fact, now that I think of it, nobody has ever given me a specific policy reason why they do not like our current president. I try to be polite about it while simultaneously making fun of them, then I give whoever I was making fun of a dollar, and we move on.

Last night, as I was talking about how much I love the president (because I do), somebody yelled out ‘Heil Hitler.’

My immediate reaction was to crumple to the floor, which I did. I don’t know why, except that it seemed to me in that moment that the show had now gone south very quickly, and if bottles were going to be thrown, I didn’t want to get hit.

But then I stood up and asked the person (shrouded in darkness, as people who scream ‘Heil Hitler’ often are) why he yelled that, thinking maybe he thought it was funny in some obtuse way, like maybe he though shouting that would be interpreted as clever satire. Or maybe he was being ironic. Grasping, I know, but I honestly had no idea why somebody would yell that outside of a Klan rally.

But I am still being polite.

The guy in the dark says, ‘Because when you say you like Obama, that’s the same thing to me as saying ‘Heil Hitler.’’

So the audience settles down, and I turn to the gentleman and say, ‘Sir, I say with this all due respect – you are a fucking moron.’

And then I kind of lost my shit.

I just started screaming at the guy. Screaming. I don’t even know what I was screaming, although the gist was, ‘How dare you compare Hitler to this president or any president? How dare you equate what he did with Obama is doing? Do you have any idea how insulting that is? Do you know anything about history? Do you have any idea what Hitler did? He killed six million of my people, which is six million more than Obama has killed. You’re a fucking idiot. You’re a fucking moron. You’re the fucking problem with this country. You and your reflexive retardation. You’re a fucking this-and-that…’ and then I just basically started yelling ‘fuck’ a lot at the guy. Fuck fuck fuck fuck.

Then he stood up and left.

But now I feel bad. I feel bad because, in retrospect, that guy didn’t deserve that. Yes he said something incredibly stupid, but my response was just as stupid. I could have made my point a million different ways without screaming into a microphone in a room filled with drunk people. I wasn’t clever, I wasn’t thoughtful, I said nothing that would move the conversation forward. I just yelled because Nazis push my Jew button (my Jew button is located right below my tail).

It was a purely emotional response, the kind that I get upset at other people for making when talking about the mosque they want to build or gay marriage or gun violence or any issue that people use to piss each other off.

Hitler is just a buzz word. Which is actually part of my problem with him saying it in such a blithe way. In a weird way, by equating policy disagreements with a genocidal egomaniac, you’re actually disrespecting Hitler. You’re actually bringing his evil down to the level of the mundane, which we should never do. Obama is Hitler because he created a consumer protection agency? C’mon.

So yeah, I kind of lost my shit last night. And to that guy who shouted out ‘Heil Hitler,’ I apologize. There was no reason to meet your idiocy with my own, even though you are a fucking moron.”

Ok, before we talk about what Black’s saying, everyone who disagrees with Black politically, just pretend that the story took place in 2006, the comedian was Nick DiPaolo or someone, and the president was George W. Bush. Unsurprisingly, the story works just as well. And, if you’re like this guy (sorry for linking to a random YouTube video but I was trying to find video of the encounter) and can’t get over Black’s statement that “nobody has ever given me a specific policy reason why they do not like our current president,” just remember that he’s only talking about people who heckle him at stand up shows. There are plenty of good reasons that people have not to like Obama but the people who have that reason are usually to smart to shout at comedians like drunk idiots.

Black may be a comedian but he’s completely right about the use of Hitler in modern political discourse. He’s not the first person to say it and he won’t be the last person to say it, but that doesn’t make him any less right. He’s also 100% correct that, by responding to the heckler, he was instantly brought down to the audience member’s level.

On a site like this one where all of the writers and readers spend much of their day hemming and hawing about politics, we should all remember that baseless exaggerations (“Bush is a fascist!” “Obama is a communist!”) doesn’t help anyone and neither does responding to it. So let’s listen to Black (he did, after all, help make two of the funniest TV series in the past two decades and one of the funniest movies ever) and cut out all the future nonsensical Hitler comparisons.

Don’t worry though. Turning people into The Joker in protest posters is still totally fair game.

(Black is a Stallion via Gawker.tv)